It would be too easy to start today's blog by writing about the "timely" upward revision to Japanese GDP that saw the N225 up nearly 5% in a day. Instead I was doing some reading in the FT about the coming crackdown on "virtual" currency tax fraud. Bitcoin of course is only one of a number of such currencies currently being championed by the "geeky" wing of the libertarian movement and day traders who find the current volatility in the N225 not enough to sustain their attention. In what must be considered a master stroke for criminal organisations everywhere it would seem that said currencies are actually being used to launder vast amounts of black money. I for one had never thought about the possibilities for this, though I have always had an interest in the way the art market bubble has for some served a similar purpose. Clearly governments are worried about the extent to which individuals can transfer wealth between jurisdictions without touching traditional banking institutions. Last month the IRS's criminal investigation division broke up an operation based in Costa Rica that essentially allowed it's one million "clients" to transfer "monies" with basically zero background information. For the investor the warnings are twofold: firstly the use of these services is risky as they are likely to attract a criminal element which if investigated may lead to your assets being frozen or worse. Secondly trading the "currencies" used to facilitate this commerce as though it were based on something other than pure fantasy is dangerous. In other words . . . if you think Bitcoin and it's siblings is a blow for freedom, think again.

This brings me back to the Yen and the Japanese governments pledge to double the money supply by the end of the year. It takes a certain chutzpah to believe by politicians and a newly politicised BoJ to sell such a policy and tell us that they can control the situation. The problem is that how can you believe the outcome will be a nicely contained 2% inflation rate and 2.5 - 3.5% GDP growth when the government is not putting in any other structural reforms simultaneously?  PM Abe is saying such a plan will be coming our way during the summer, but in the meantime I'm guess the talking up of stimulus and down the Yen will continue. Given this it is going to be hard making money on the short side of Japanese equities.

The problem with currency devaluation is that it can hurt the very people you're trying to help. During the 97 Asia crisis the cost of energy and food soared in many of the regions countries. In India, for example a weakening rupee put undue stress on governments finances because of the large subsidies the government places on petroleum products. You wouldn't think about this for Japan but consider that the according to Bloomberg the Japanese crude basket is up 35% this year. Lets leave aside that this is bad for the refiners and focus on the fact that in the post Fukushima world Japan has substituted fossil fuels for nuclear and in doing so is building-in a bigger problem. Many would argue that the stronger USD will eventually start to erode the price for products such as crude oil, but I'm not so sure the current consumption patterns suggest that is inevitable. For those with a green tinge to their thinking it might mean that alternative energies get a boost in the long term, though going long the suppliers of wind turbines, solar cells and tidal generators is somewhat risky nowadays when government subsidies are being scaled back. Anyone interested in a slightly used solar farm in Spain should feel free to contact me.

The bond curves have been shifting upwards again and the crucial mortgage driving US 30year has retraced much of the territory it covered since the Fed stepped things up in the first half of last year. 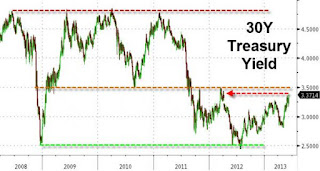 The concern now is that equities and bonds are becoming disjointed, suggesting that at some stage the tears are going to flow again. I heard one theory that what we're seeing is a carefully managed deflating of the bond bubble by the powers to be, but seriously how can that be? It's hard to imagine that Bernanke is willing to keep spending 85bn a month for nothing but higher mortgage rates? How does that help unemployment etc? I think instead that this is the smart money getting out while it can. The USD remains my best bet for the coming months, more so as rates increase. Who knows . . . you might actually start to get paid something for your bank account deposits?

Sydney was quiet over the last few days because of the traditional June long weekend. Normally I'd say it was a pleasure riding the deserted streets, but unfortunately there was a bike rider killed close to one of my usual routes. I can't think of a worse time to go. I know since my own recent run in with a car bonnet that I've been riding extra defensively, but even I let my guard down over the last few days wrongly lulled into a sense of security by the absence of some of the more aggressive school run and tradesmen type drivers. The lesson is clear . . . trust no one. Not even central bankers.