Some disruptions going on (apologies to BBY) . . .

BBY are hosting another of their disruptive lunches in Melbourne today with my particular favourite Catapult Sports headlining. Funnily enough the more I think about these companies the more I asked myself what it takes to turn around an old school business and make it relevant again at the "pointy" end of growth both for shareholders and for customers. Take for example Microsoft. I find the changes at Redmond fascinating since new CEO Satya Nadella took over from Steve Ballmer. In the year before Ballmer gave up the "captains" role at Microsoft there was an almost hyperactive feel to the company as they surged into various platforms.

What Nadella has done is thrown all that in the air and challenge the exciting way of "things" even while his predecessor sits on the board clutching a huge chunk of shares. As with much of business since the global crisis there is a clear path being set out along the road of shrink to grow. First cab off the rank was 18,000 redundancies which while awful for those caught in the net is a clear sign of Nadella's commitment to the cause. That cause of course was encapsulated in a now famous/infamous 3,100 word memo to staff that called for an increase in productivity (thus the job cuts) and refocusing on core platforms. In the meantime the company has finally seen the beginning of the end of Window's XP as the PC cycle has shifted from interminable decline to at least a stable outlook. That means revenue for Microsoft is growing again. We're not going to see the end to this for years, but investors need to watch this closely whether they hold Microsoft shares or not because even if Nadella doesn't succeed he can do a great deal of damage to others caught in the path from the Pacific Northwest to Silicon Valley.

One of my favourite business books of the last few years is Pamela Williams' Killing Fairfax. For those not  au fait with the Australian media scene Fairfax was the dominant player in the quality broadsheet end of the newspaper market. 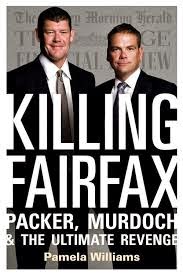 It suffered a near catastrophic death in the late eighties due to a failed LBO by one of the family members who wanted to take it private. Since then it has wandered somewhat aimlessly turning over CEO's and Chairman on a regular basis while all the time lurching from crisis to crisis. In the 2000's it ceded it's natural home of electronic classifieds to several new players financed in part by long time competitors including Rupert Murdoch's son. Now with Australia's richest woman owning 14.99% and a core franchise that has been constantly eaten away from just the type of disruptive businesses that BBY has been presenting the company sees itself once again on the precipice of sale and dismemberment. Gina Rinehart sits brooding atop of her shareholding openly courting advice as to the correct strategy to transform the company. None openly are willing to step into the breech. Rinehart is unlikely to be a benign overlord in the way that many assume Amazon's Jeff Bezos will be at the Washington Post. Ms. Reinhart I think will be rather more hard headed and with that I might venture a guess as to strategy:

That should be a start. Most of all the board, management and staff need to know what is left after all of this is going to be leaner and hungrier. It will take an inspirational appointment to the role of CEO by any buyer, with luck as Yahoo found Marissa Mayer, so Fairfax might find someone of equal talent and motivation. Of course as an investor my guess is that if you own the shares at the moment you'll be happy if a buyer comes along so you can exit with a premium and re-invest into something more disruptive with help from BBY.

If you want to see the latest in immersive fan experience check out Suffervision.com. Essentially you up load the video from your ride, run, swim or ski run and the stats from a personal fitness website such as Strava and it merges them into one "narrative". Here's stage 16 from The Tour De France.


Hit the play button in the lower left corner and then play with the other buttons. I like to overlay the power numbers (in this case from eventual stage winner Mick Rogers), but you can also look at the elevation profile while watching the speed, remand time. The only thing that could make it better is if you could have the information from several riders on the screen at the same time. I believe Catapult Sports has the same thing available, but with a lot more metrics for the pros, but if you're an amateur or just interested in your own performance just match your stats with video from your GoPro (or similar) divide and you're up and "riding"