Credit where credit's due . . . Riding 13hrs a day in Russian wilderness

It's not a self-fulfilling prophecy if the facts came before the events. As an investor it's up to you to decide what events are likely to change your asset allocations, but never ignore the impact of an accumulation of small details. It's all about marginal gains whether you're riding the Tour de France or deciding the credit worthiness of an entity . . .

Last week was a great example of this. Firstly, as I wrote previously the repo market seemed somewhat disjointed. Secondly a report in the FT confirmed that a certain apathy was at work in the markets as shown by the fact that short selling was at its lowest level in the US, UK and the rest of Europe since the crisis. And then the penny dropped in the form of a situation that had been brewing in the background in the form of Portuguese bank  Espírito Santo or more precisely its Luxembourg parent holding company Espírito Santo International missing some payments on commercial paper. 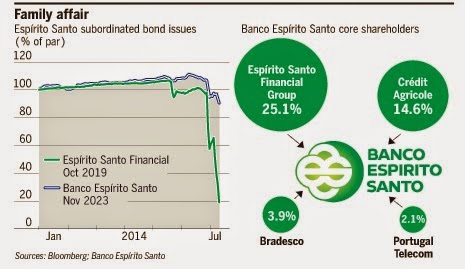 So this paper was issued by the Espírito Santo International to retail investment funds elsewhere within the group, much in the same way that many big banks will issue derivatives out of a separately capitalised entity so as to provide a credit wrapper of sufficient worthiness to buyers. If that all sounds too complicated, you're right. All you have to know is that people got worried they weren't going to get paid what was due to them. When that happens investors go straight back to what they know best and in Europe that's German Bunds and internationally it's US Treasuries. All of a sudden the carry trades don't make as much sense if you think you're not going to actually receive the funds from the contracted parties.

Credit worthiness is not something the average investors considers often when executing a trade with a bank. Many times people just look at a letter head and equate that to an institution. This was one of the great fallacies of the 2007/8 crisis when financial institutions used increasingly more sophisticated structures to imply a certain credit rating to a derivative structure that in itself was not all that credit worthy. Readers of this blog will remember the first IB Cyclist law of extended derivatives markets:

I now give you the second law to consider:

Furthermore just double everything for a shady domicile and secretive majority shareholder(s) who spends very little time travelling on commercial flights with normal members of the public. Therefore if you buy a structured product from a small bank who issues paper out of an LLC that didn't exist a year ago and is based in a (say) Caribbean jurisdiction from which they are conducting a large volume of such trades then please raise an eyebrow of cynicism.

Always eschew the opaque in favour of the clear. Investors should want to see very clear systems in place for periodic payments, settlements, conflict resolution and where appropriate direct accountability back to the parent company. Everything needs to be aligned so that you'll always know what is supposed to happen next.

When I was a convertible bond trader I always liked to be the holder of record in respect of  a small tranche of bonds even if I was net short the instrument. Why? Well in most cases issuers in the bond market rarely have a duty to contact equity shareholders if a special purpose vehicle they setup to issue a debt instrument has failed to make a payment etc., but they will contact the bond holders and that information can be very valuable not only to you as an investor, but if you work for a large fund or financial institution it gives you a first mover opportunity in everything from cutting credit lines, increasing margining or collateral and of course hedging your positions. Remember that J P Morgan was well ahead of the game in the case of Lehmans because they as clearer could see the strains that Dick Fuld's team were under. Of course pay back is a bitch and when JPM themselves ran into their own problems in the guise of the "London Whale scandal" there were plenty who could see the irony of trading on the back of being a counter party with knowledge that these bets could not be sustained.

This week I'll be looking into a number of companies that deal in credit. I'm particularly concerned with loan administration at the moment. Say two parties agree to contract a loan agreement, then if it's of a commercial nature and simple they'll use a lawyer or notary to formalise the agreement and act as an agent to administer payments etc. If there's a lot of loans between multiple parties you need for issues of scalability a particular entity whose main focus is accumulating and disseminating details to all contracting parties. Finally you want that administrator to have very clear guidelines in the case of missed payments or default. This could be anything from serving various notices to a timetable detailing days in arrears before lodging a court debt claim. Finally of course I need to know what happens if I get a judgement in my favour, such as is there any collateral available to liquidate? It doesn't matter whether it's $1bn or $10k, an administrator needs to know what they're doing from the time the contract is formed until the time it either expires or is terminated.

I try to remain open minded on things even if the cynic in me makes it difficult. When things are too good to be true then they usually blow up in your face. In cycling or more specifically the world of Strava I keep an eye on things by monitoring their monthly ride or run challenges. There are some ridiculously fit people in the world and I'm constantly amazed at what people claim to be up to. Take for instance this month's challenge page for cycling. 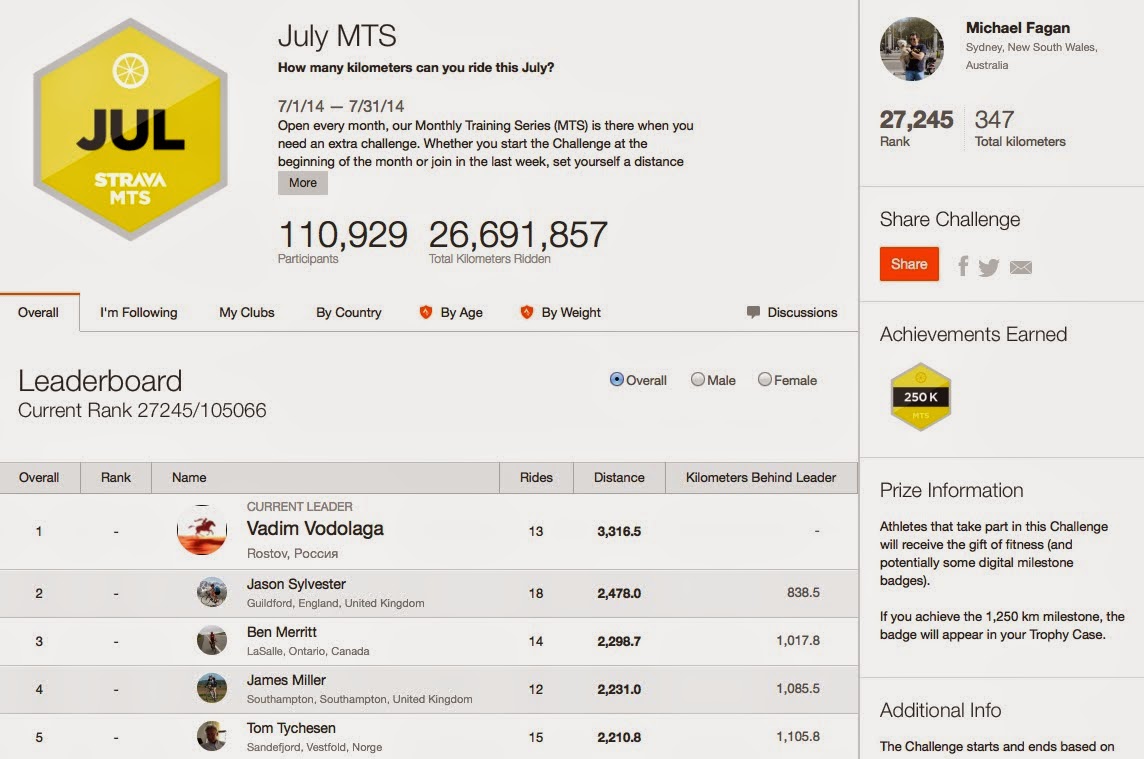 The leader this month is a gentlemen(?) by the name of Vadim Vodolaga. In the thirteen days of July so far he's ridden 3316.5kms through some pretty remote parts of Russia. I have no idea how he's done it and frankly he must be a super man. The only thing he'll win if he finishes atop the leader board is an electronic badge to go on his Strava profile page, so it's not about money. I just can't shake the feeling that it's too good to be true. Here's Vadim's riding profile for the past year:

It looks to me that this guy rides like this once a year, which does in itself indicate that he's done it before. I just find it hard to believe that you can do so little time on the bike and suddenly just get on and ride 13hrs a day. I guess I should be in awe, but I'm wondering if it's a fake. It's kind of like watching tech companies go from zero to a $1bn capitalisation in the space of a few months, you need to get to see them face to face and test what they're up to before investing further. Therefore I'm treating Vadim like a credit officer treats a special purpose vehicle . . . show me the structure and prove to me what you're doing is verifiable and you'll have 100% of my admiration. Of course until then I'll be making an emotional provision against possible irregularities and limiting the size of our business while awaiting updates. Good luck Vadim, whatever you're trying to accomplish.