Flaws . . . more on Catapult Sports and a ride up a hill with a MAMIL

Would you lend the Republic of Senegal $500m at 6.25% for 10 years? Lead bankers actually had demand for up to $4bn of Senegalese debt last week when they priced this deal and while I don't begrudge Senegal the cash I do wonder where we're going in terms of risk pricing. For the record here's the current state of the worlds major bond markets in respect of 10 year yield:

The bond in question actually traded above issue price in the days after the deal was struck. The bankers interviewed since then have come out with some very interesting insights on whats going on in global capital markets which this blog feels is important for investors to understand. Essentially the pressure on yields in the broader USD denominated money markets have left investors with little room to move. The choices are limited. With 10 year UST's trading at under 2.5% it's hardly a strategy for wealth building. Russia a traditional outlet for emerging market yield investors is a "no-go" area. Africa as an outlet for EM monies didn't happen overnight, rather it's gained momentum in the face of ultra-low G7/20 rates. Nigeria, a country with a serious civil unrest problem highlighted by the kidnap of over 200 schoolgirls by fundamentalist rebels has been a consistent participant in the eurobond market. Look at the following tables and you'll see that Nigerian bonds trade only 200bp above their US counterparts.
You need more information? Take the results of the Ibrahim Index of African Governance. The index was established in 2007 and styles itself as the most comprehensive collection of quantitative data on governance in Africa. The IIAG provides an annual assessment of governance in every African country. Here's the 2013 results: 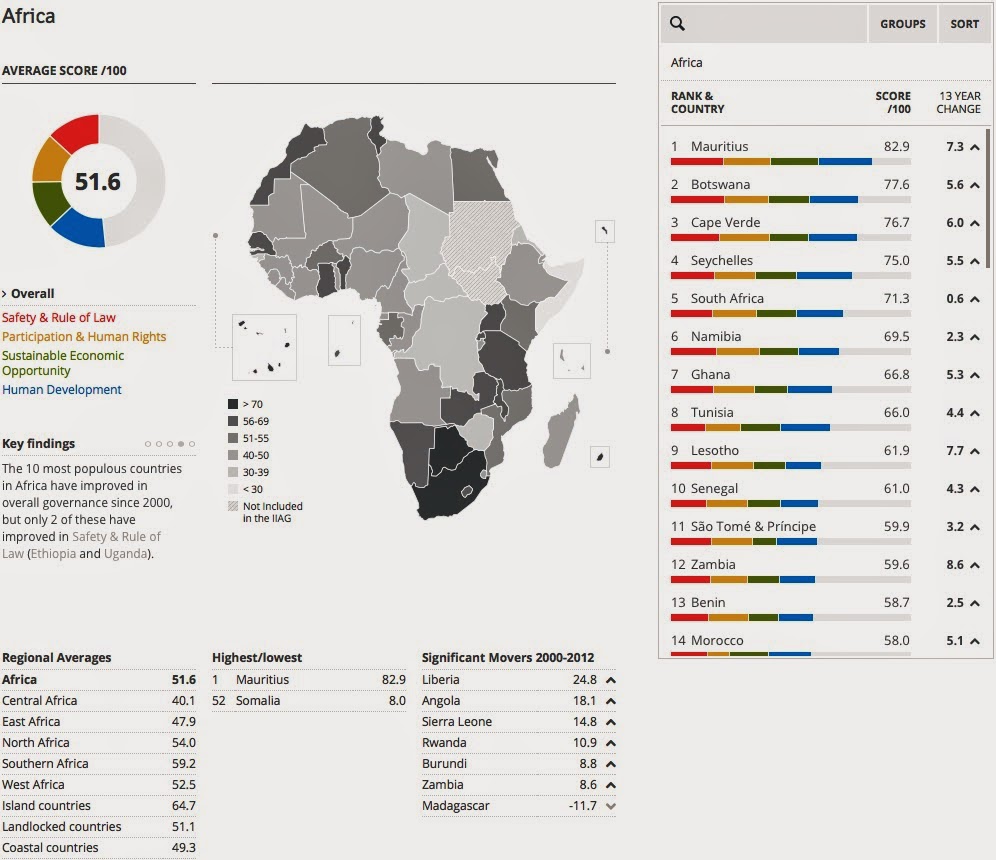 Just in case you think I'm down on Africa lets take Argentina. Currently the Argentinian government is toying with yet another international debt default because it feels that it's being held to ransom by a group of hedge funds who held out at a previous debt negotiation and now want to be paid before Argentina distributes coupon payments to those who took the restructured paper. This blog doesn't want to get into the politics of the situation, but think about this . . . Argentina has a strong agricultural sector, a burgeoning resource space and a highly educated population. What it doesn't have is a strong history of adherence to the rule of law or sound fiscal institutions willing to stand up to populist governments with balance sheet facts. It's a case of you reap what you sow as an investor and to be frank maybe African countries if given as many chances as Argentina deserve the current demand they have for their international bonds.

Back to the Senegal bonds. At 6.25% coupon for 10 years; you need to take into account your portfolio shape, both in terms of spread of geographical and credit risk, not to mention duration skew. So for every 100 dollars you want to invest in bonds perhaps 5% - 10% goes into emerging markets, then and only then do you decide you want to weigh up the merits of Senegal v Nigeria v Russia v Argentina  . . . etc. As usual diversification is your first risk management tool. Welcome to the world of bonds. In equities you spend hours fretting about PERs, CEO performance, product margins. In bonds you worry about the percentage of your portfolio that might default and whether the balance provides enough yield and potential re-rating to offset the risk. As the baby boomer generation ages, especially in the anglo saxon equity world they'll have to switch into bonds to preserve capital rather than increase it and with that as an investor you need to start looking at these instruments when you can, not when you have to.

This all brings me to the third of the Investment Banker Cyclist rules for derivative investing. The first two were:

The third rule is:

Always assume that most investors never read past page 5 of a 200 page offering document, term sheet or prospectus

Bankers, lawyers and regulators don't make offering documents the size of War and Peace for fun. It costs a lot to print all those "red herrings" and amendments. Investors need to read the documents. I know it's boring, but a lot of the smartest brains in finance spend countless hours formulating the pricing, trading and dispute rules in respect to a particular instrument. This is especially the case for derivatives. For those who've never bothered reading offering documents I challenge you to pick just one to go through and I defy you not to note at least a half a dozen things you've never thought or heard of before. Let's take something simple such as the Argentinian bonds mentioned above. There's a clause called Rights Upon Future Offers (RUFO). Not an unusual clause in a bond like this, but few will have bothered to read a RUFO before. Essentially this is a clause that says that if (in this case) Argentina renegotiates the terms of the bond then all bond holders get offered the same deal. On December 31st 2014 the RUFO expires. This means that those holders of bonds that didn't accept prior restructuring can be negotiated with as a separate class of investors. This is good news if you held out because there's a clear incentive for Argentina to wait and negotiate with you separately, safe in the knowledge that if they offered you par (100% of face value) for your bonds they wouldn't have to come up with about $15bn for those that chose not to hold out. Funds involved in this are smart and they had enough "prospectus geeks" to know this and to understand the cost benefit equation for the Argentinians. Here's a nice graphic explaining the scenarios:
It's not important for the purposes of this blog to understand the potential outcomes of an Argentinian default, rather my broader point is that you need to understand the documentation to fully appreciate the possibilities. Investors need to understand the flaws in their own position as well as in the position of issuers.

Flaws exist in all types of credit and quantitive risks. Take the Australian bank hybrid co-contingency bonds I've spoken about previously. I had meeting with a senior figure in the finance industry here about 2 weeks ago and during the discussion I mentioned the way investors seemed to ignore the conversion risk in theses hybrids. I thought I was getting nowhere in terms of explaining the true rank of this paper within the capital structure of the issuing institutions and how they were promoted like bonds, yet under stress behaved like equity. I heard later that the message got through and although I'm not sure it got me any closer to getting a permanent or temporary position with the firm in question at least I hadn't completely wasted mine or there time. A classic case of read the prospectus.

I wrote recently about how impressed I was with Catapult Sports at a BBY lunch I attended. As a follow-up I've been keeping an ear out in the media for news as to how their business is progressing. I was listening to the Ross Tucker Football Podcast today when I heard Philadelphia Eagles coach "Chip" Kelly speaking to ex-NFL lineman and Princeton alumni Ross Tucker and ex-Indianapolos Colts GM Bill Polian from Eagles training camp. Kelly used Catapult in his previous job as head coach at Oregon University and clearly brought the technology into the Eagles. You need to know Kelly is famous for bringing a more up tempo approach to the gridiron. This of course means a greater number of plays per game than what the old guard are used to. Clearly to do this they need more data to monitor players and the exertion that these huge men are capable of during practice and in a game. This means Kelly and his team of coaches needs to know exactly what his players are physiologically capable of.  Listen in carefully (see the link below - fast forward to 7'30") and while Kelly doesn't name Catapult outright you can hear within his answers the allusion to the "data" that allowed them to keep a healthy roaster during last season, maximise their potential practice time and allow them to make the playoffs.

It's a great insight into the world of top-end pro-sports. Basically he's saying we have Catapult and it's good. Listen in when Tucker asks him about "pitch counts" for a particular player, essentially the number of plays he can put in before he loses effectiveness. Kelly's response is so revealing. With respect to Ross he basically says . . . (paraphrasing) . . . "pitch count?! Forget that, we have hard data and know exactly what players bodies are doing". Kelly is very smooth. Tucker and Polian do a good job, but Kelly or someone from Catapult needs to show them the tech in action.  Investors need to listen in to this one. And if you are at all interested in the NFL I suggest you follow Tucker's podcast.

Finally a word about the Tour de France 2014. I've had it described to me as a boring procession this year. Honestly I don't get that. Brilliant tour. Enjoyed it thoroughly. Unbelievable effort by Nibali, he attacked on numerous stages and won 4! That hasn't been done in quite a while. On top of that you had the Frenchmen fighting it out for a place on the podium with Valverde. And then there was Sagan's continual frustration with his inability to win a stage. What about Majka  . . .  the guy didn't even want to be on the Tour at the start and he won 2 stages and the King of the Mountains jersey? The crowds in England  . . .  the sprint on the Mall. What more do you want? Then there was some inspiration for we middle aged men in lycra in the form of double champion Greg LeMond's return to the Tour as a commentator for Eurosports. The LeMond segment that brought the biggest smile to my face was when he rode up the Col du Tourmalet for the first time since 1991. Greg's carrying a few more pounds now days, but forgive him as he was and is a great champion: