Early warning . . . riding into London and out on to the fields of the Great War

The US Treasuries are the instrument of choice for one of the deepest most liquid markets in the financial world. The trouble with this is that for many investors it simply represents the highest level of deposit protection available in governments financing. While many would say such assumptions are wrong, it's exactly how the "man in the street" investor operates. There's a another side to the market that many may either have never known or thought about.

As an ex-trader of various multi-asset books over the years treasuries represent an important hedging tool for the interest rate sensitivity of my positions when priced in US dollars. Let's take an example, say I'm long corporate bonds as portfolio and all I want to do is capture a carry pickup of the portfolio over the risk free interest rate available, I'd sell some treasuries against the portfolio after working out certain sensitivities from historical data. This requires me to borrow the treasuries and pay a fee to a holder of these instruments which is called the repo rate. If I can't "repo" the bonds I have more exposure than I want and I may decide that the risk of holding the portfolio of other instruments is not worth the risk. Sometimes when you can't borrow the bonds you still sell Treasuries short and "fail" on the trade and pay an extra fee because you like the risk metrics and carry on the portfolio you're trying to hedge so much that you're willing to pay the extra cash.

It's all very good to fail on trades for short periods, especially if you're one of the few and not one of many doing the same thing. You see if you find that lots of investors are failing in this the most liquid repo market in the world you get a liquidity problem building and banks start to distrust each other and their counter-parties ability to meet the terms of their sales contracts. When this happens as it did in 2007-8 you start to see credit lines being withdrawn and with them goes liquidity out of the system. Banks and institutions that require leverage (i.e. borrowings) to make returns suddenly have their businesses shut down and you get a Lehman Bros, Bear Stearns type situation. The Fed and most central banks monitor closely the health of their government bond repo markets knowing that if confidence starts to fail it usually shows up here first.

Why bring this up? Interestingly today I noticed on Bloomberg news a report that the Fed data was showing that failures to deliver Treasuries have averaged $65.6 billion a week this year and peaked in the week ending June 18 at $197.6 billion. By comparison uncompleted trades averaged $51.6 billion in 2013, and $28.8 billion in 2012, according to the Fed. In June repo costs got out to as much as 3%. This is in a market where the coupon for recent 10 year bonds was 2.5%. If you're a trader you really want to hope you're sitting on a lot of positive carry to put this hedge on or you're locking in a loss. As an investor when repos failures build up you need to ask about not only the liquidity in the bond markets but also equities and FX. Remember in equities you have rates sensitivities in any portfolio contains derivatives, hybrids or alike. More importantly it's not just contained in US markets, but also in multiple jurisdictions as foreign companies relying on the breadth and depth of US bond markets for financing. Take the Australian Banks as an example (following on from my blog yesterday). They have been big users of the US markets this year because they are happy to borrow in USD and lend into the Australian housing and credit markets in AUD making as I previously described a tidy pickup in carry. They hedge this through FX swaps and alike which in turn have a rates component. Now you see what can happen. Withdraw liquidity in the largest bond market in the world and it can ripple back to a credit card holder in Australia.

So what do we make of this latest data? Well it's not panic stations just yet. There's enough corporate profits being made for this to go on for quite a while. There's also another policy aspect to this in that the Feds QE which still stands at over $30bn a month is actually causing some of this by removing longer term bonds from the market by pumping cash into the system to force the banks into the carry trade by lending this cash out. The trick is for Yellen and Co. to get the balance right as we end QE. Withdraw purchases too quickly and liquidity in the real economy (like SME lending) will dry up. Take too long and you may have created a crisis in confidence that sees a new set of problems develop.  Investors need to monitor this data as an early warning sign that things are not well.

As a kind adjunct to the repo situation it seems that the Basel Committee on Banking Supervision is contemplating requiring banks to risk adjust their sovereign bond portfolios (via the Wall St Journal).

Here's the problem. When Greece defaulted on its' sovereign bonds it called into question the measurement of risk capital within banks throughout the Eurozone. Up until 2007 and since the introduction of the Euro the ECB and members preached convergence of money markets. In effect the ECB tried for years to make us believe that a Greek or Italian bond was the same as a German Bund. As part of this there was a concept that if you were an Italian bank holding Italian bonds these were considered the same risk as when they held German Bunds, which we now know is nonsense. So institutions ran a carry trade were they borrowed from the Germans and lent to the Italians (in this case) and all was good. So now the Basel Committee wants to revisit this, meaning you that say you were a Spanish bank your government's bonds might have a 10% risk discount for which you would have to allow in testing your own capitalisation and subsequently this would lead you to having to raise proportionally more tier 1 capital per capital Spanish bond v. German Bund as an example.

This all raises a number of problems in that if you were to suddenly require a new round of capital raising amongst countries where the bonds were likely to attract some sort of risk penalty you'd be hurting the banking systems most in need of relief. Here's a chart from the WSJ showing the size of the problem: 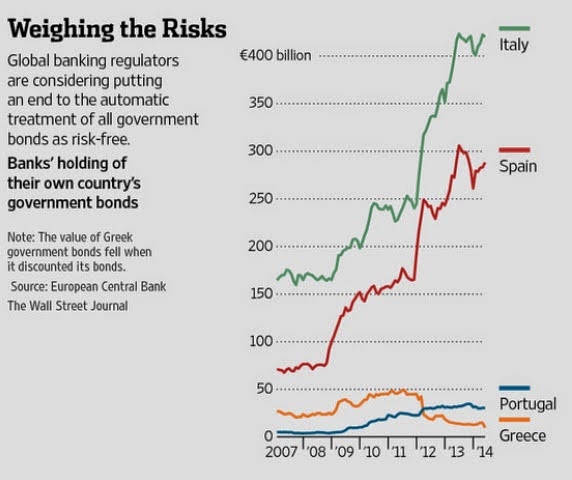 The problem is obvious and I can only suggest that any changes are made incrementally and carefully.  If you're an investor it also should add to your anxiety as it encapsulates the problem of building global portfolios of anything. Imagine you're running a global bond fund . . . you probably own the high yielding G20 Eurozone bonds and are short some Bunds and even some US Treasuries. Your repo rate has moved higher in the US and because of the "non-convergience" the Basel Group is implying you'll need to add to your short hedge. It  starts to get very complicated and should give you pause for consideration.

Perhaps then you may have been part of the millions who've lined the streets of the UK to catch a glimpse of the TdF 2014's sojourn onto those green and pleasant islands. If like me you were gobsmacked at the sheer size of the crowds lining the way from Cambride to the Royal Mall in London you probably forgot about the signals from the money markets to enjoy the spectacle of the big German sprinter crossing the line in front of Buckingham Palace. 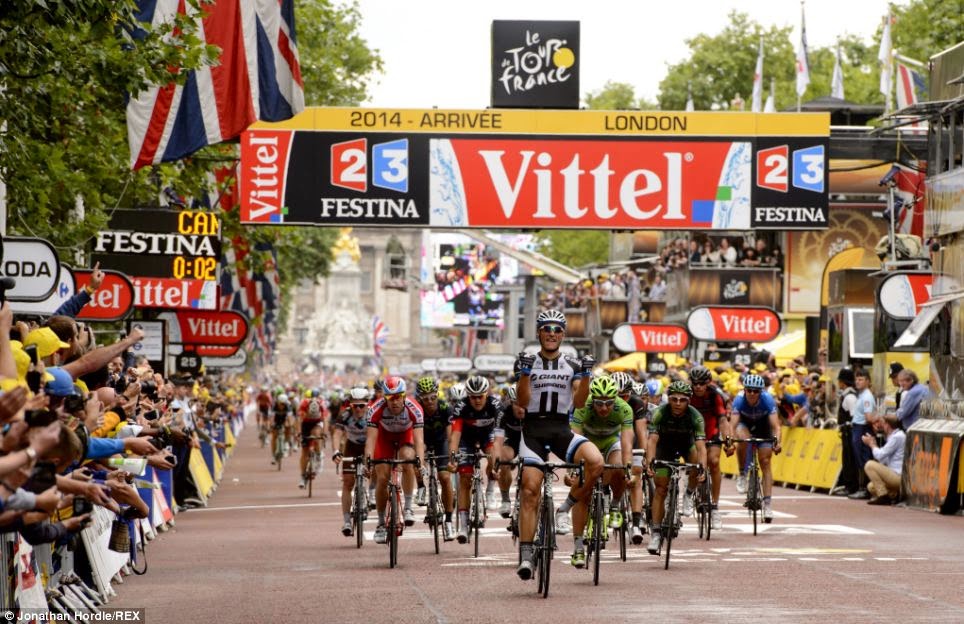 I loved living in London and for years now the old lady has been tarting herself up with new infrastructure throughout the capital. The pictures were great and France herself has much to live up to. The Peloton has one more sprinters stage before reaching the first of the French highlights this year with Stage 5 where the TdF will remember the Great War by riding the fields of north west France were the great battles took place.


As the video shows it's a mini Paris Roubaix across the classic cobbles. The stage starts at Ypres in Belgium, the scene of so much carnage. I hope the fields are full of poppies and we get time to spare a thought for those that died. They'll be nine sectors of pave for the riders to negotiate.I can't imagine going 45kph on those cobblestone, let alone my more likely speed of 30kph., but I'd like to try.