It's been a long week especially for those in the media. The once secure denezens of the worlds top broadsheets were once again reminded about their career mortatilty when newspapers started to change hands at a rapid pace in the US.

When the New York Times Co. sold the Boston Globe to Red Sox owner and sometime trading guru John Henry for $70m dollars late last week I got to thinking about how quickly value can be destroyed. Some 20 years ago the NYTimes paid $1.1bn for the Globe as it moved to tie up east coast media in some of the richest areas in America. The theory that classifieds would always be king and that these could be easily moved into the electronic world pre-dated the influence of eBay and Craig's List. Looking back at those times it seems again like a lot of so called leaders of business were caught out by the rise of the internet and their only reprieve, the collapse of the dotcom bubble left them grasping at straws.

A couple of days later and the Washington Post Co. sold its' namesake newspaper to Amazon founder Jeff Bezos to concerntrae on its' Kapplan education business which already was providing 55% of the company's revenue. This of course is similar to what Rupert Murdoch did by splitting News Corp into 21st Century Fox (broadcasting) and News Corp (publishing). So the Bezos bet will be leverage his own distribution and marketing genius to get the Washington Post in a position to give a reasonable return in the 21st century. If it works he'll look like a management guru and if it doesn't, well it's only $250m and thats a vanity on the scale of a couple of very high-end corporate jets he can write-off as a bit of fun.

Meanwhile in Australia Fairfax Media which holds the country's leading broadsheets, has seen it's shareprice collapse under the weight of shrinking revenues and tough online competition. This is where the fun and the pain really come into focus because Fairfax has steadfastly refused to move into the 21st century until it's now too late. 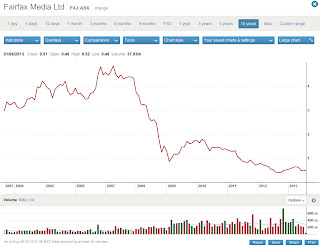 Looking at the numbers there's an argument that the stock is cheap at current book value of about 90cents, but they are already making further write-downs in the current financial year . . . so you may as well say that this argument is a moving feast. Then there's the digital potential argument, which is pertinent when you consider what a Jeff Bezos will be trying to do at the Washington Post. Here's the Fairfax digital performance: 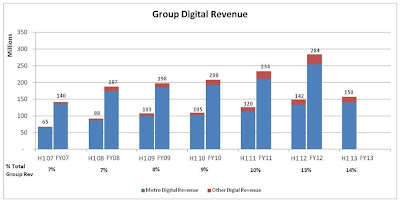 It's not horrible, but it's not exactly google is it? Where's the love for management when digital revenue is a bit more than 10% of overall revenues. Add to this that it's hard to separate the purely digital from the bolt-ons that the company has to its' publishing mastheads. Is it any wonder old media lies wasting away waiting for a new management plan. In Fairfax's case they had believed that the value of their product was their history, but of course that's not a recipe for future success in itself. Here's the recent history of Fairfax: 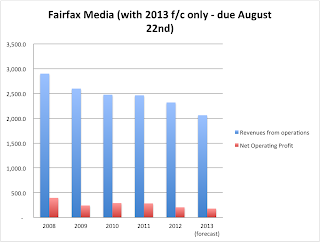 Trends are made to be broken. I've extracted just the operating results to show the performance of the business itself. The company reports again on August 22nd and it should be interesting, especially if you're a good analyst and are prepared to ask the board some questions about their strategy in the light of the recent asset sales in the US. The share register for the company has a few Aussie billionaires and some other activists on it. There is M&A potential, but why would you take the risk without the ability to execute . . . unless of course you treat 9the odd masthead as a vanity purchase. No, Investors might be best placed to avoid this unless you believe the general economy will pick up in the 2014 year. Current indications are that this would be foolhardy. Maybe one of the new generation of e-billionaires might fancy some beach property in Australia and a newspaper or two?


I was writing a while back about Banca Monte dei Paschi di Siena and the mess they were in. They recently reported more disastrous numbers once again showing how long the road to recovery will be for many of these banks left with toxic assets and a declining talent base. Last week S&P lowered the ratings on 18 Italian banks as quoting the growth in non-performing loans. The problem now is that these banks are not making loans at anything like the rate required due to the need to raise the supporting capital. The cost of that capital is way too high leaving the banks with no one but the ECB to rely on in the meantime. The US is well ahead of Europe on the road to recovery and should remain the primary focus of the investor at this time.


The European cycling season has reached the point of its' final grand tour of the year in Spain. As usual the heat and the mountains will feature prominently. The teams still standing are looking forward to next year as quite a few of them will be looking for new sponsors. Saxo for one will be looking to replace Russian money with someone new. And Euskaltel-Euskadi will probably have to go outside its' traditional basque supporters for cash to compete. If forced to close their doors and become another business casualy on the books of a mediterranean bank it will be a real shame. The team rode the new Orbea Orca at the TdF this year and certainly looked like a beautiful machine to me. 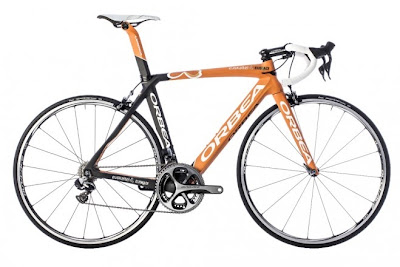 The new Orca represents the new wave of frames that are suitable for mounting either electronic or mechanical shifting group sets. I know I for one wish that my frames had this adaptability as I'd certainly like to give electronic shifting a try without having to butcher my frames with adapters and various work-arounds. Check this out . . .

Very neat wiring and some nice aero features. The frame is 950gms, but considering the internal wiring etc. I think if you're anything like me that you won't notice too much of a difference v. the super whippets out there at the moments. Maybe set her up with some of Campagnolo's new 35mm Boras and reckon you'll be the envy of the Saturday morning peloton.

The question remains how to pay for it all . . . cut costs or leverage up. I wonder how that might end?
Ciao!
Posted by Mike Fagan at 04:25