Is CBA the best bank in the developed world?

Yesterday the Commonwealth Bank of Australia reported and although I've always been cynical about the Australian banks and their performance it's hard to argue with some of the numbers they've put up in the last few years. CBA is up over 30% in the last year and it's been able to produce an RoE of 18.4%. That's impressive given we've been getting used to banks talking about a 10% RoE as being the new norm.

There's no doubt that the current rates cycle in Australia is nearly over and that the bank will have to look forward to the swing up in funding costs and probably an increase in non-performing loans in the next few years, but until then all they have to do is make some prudent funding decisions and they should have a sufficient buffer to do deal with any problems. As with all Australian banks the two areas I'm most interested in are the source and duration of funding and the current shape of the loan portfolio. Here are the charts from the investor presentation that caught my eye: 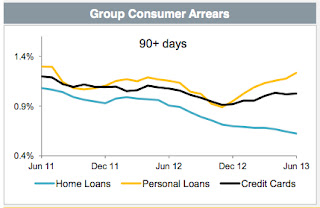 Retail sales in Australia have been dismal for some time and therefore one might have suspected that consumer credit arears may have been going up as some sign of economic stress. The above chart though shows a surprisingly benign environment even given the uptrend in the arrears on personal loans . Clearly mortgage stress is also not the problem within the portfolio that many bears on Australia might have thought. 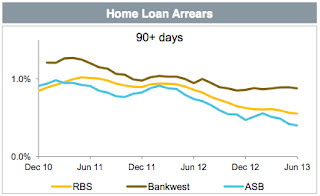 And here's the home loan situation magnified to show the major divisional units. I suspect that the figures for Bankwest might be tracking down as CBA plays with the mix of customers that they direct to the unit; meaning that jumbo mortgages probably get put in one of the other units that might be better placed to monitor a borrowers credit status. 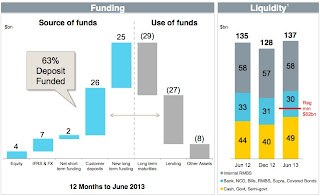 The current liquidity and source of funds is looking better than previously reported. Remember that the bears have always raised question about the funding of the big 4 Aussie banks loan books based on the fact that so much is sourced overseas. Well that's still a concern, but the shock of 2008 is clearly starting to move them away from this model.

Normally investors might have been happy to get a special dividend as competitor Westpac have recently announced, but management has decided to stay comparatively over capitalised as we get closer to full Basel III implementation. I also seem to remember that you just might be doing shareholders a favour if you see growth opportunities out there while simultaneously running an 18% RoE.

Finally CBA could be the best bank in the world, but that doesn't make it the cheapest. It's trading on a PBR of over 2x. 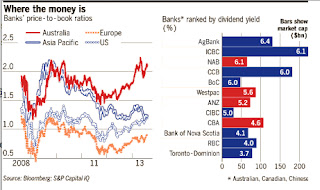 It's share price is close to all time highs and Australia as a whole still has to face up to a slowing demand from China. If you had it in your portfolio you wouldn't be selling it aggressively, but you may want to keep an eye on it so as to fund another position in your portfolio.

The AUD bounced back above 90 cents partly as response to the iron ore price's continuing upward move and partly because of the recent disclosure of an update by the Australian Treasury. Iron Ore is now back at the $140 per ton level. Nomura estimates that there is an excess 400m tonnes of the steel currently in the system as we go into the seasonally weak period for iron ore. Given this it would seem foolhardy to see the current move as having any real fundamental support and therefore investors in AUD assets need to adopt an appropriate attitude.

I had some notes recently commenting on the weather in Sydney and the high winter temperatures. The cycling opportunities have been everywhere, I just haven't managed to get out of town. There's a few events come up around Sydney including a Wiggle.com.au event in the Hunter Valley that I've entered. 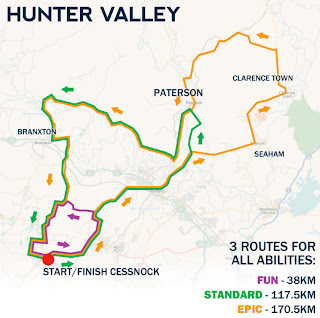 It's a nice area of the world and as long as the mining trucks are off the road it should be a great day. I chose the 120km ride as the 175km is just too much for me. You see I'm almost bored by the time I get to the 100k mark and just want to finish. Of course it will depend on the type of day and the number of metres to climb, but in my case I'm betting I can average around 25kph or so, though I'd like to try for something closer to 30 . . . but you have to be realistic. It's a 7am start unlike the races in Italy which tend to start at 9am, which gives you a chance to digest your breakfast and wake up properly.

If you've never ridden an event like this it can be a little intimidating because you're going to find that riders set off at an absolutely unbelievable pace. I mean some people are just plain nuts. I have no idea if Australia is the same because I haven't ridden that many events. I think this time around I'll carry more solid food and less gels. In addition I'll try and ride on newish tyres because Australian country roads are not at all similar to the billiard table like Swiss roads I first rolled on. The other thing I'll put in a saddle bag will be a patch kit as I'm not sure two tubes will be enough. Obviously therefore I'll also want a couple of CO2 cartridges and a mini pump. The other thing I think that's good to do is to upload the course onto my Garmin 800 so I have a good idea where I am at any moment on the course and importantly where the feed stops are.

The good thing about being a cyclist in Australia is that you're out of the European season, therefore I'm looking forward to getting a chance at the end of season sales from the Euro online retailers. I could really use a new pair of Sidi shoes (the "wire" model would be perfect in size 45.5 if you're wondering).