Living in the UK for 8 Years until 2005 tossed up many conundrums. I miss the sheer variety of the media, which for all its' faults and foibles was and still is a cornerstone of a great democracy. On broadcasting Channel 4 news has always seemed to me somewhat of a strange exotic bird. It clearly looks at the world from the guilt of the inner city left, but remains just broad enough to have had me as a viewer no matter where I've lived. There are two good reasons to watch senior anchor Jon Snow and his colleagues on a nightly basis. The first is Snow is a convert to the cyclist's cause regularly riding to work and contributing his thoughts on the subject via his daily blog.

The second is that you'll probably get a lot out of senior economics correspondent Faisal Islam and importantly he's spent the last couple of years writing a new book on the economic crisis: Default Line.


I haven't read more than extracts so far but I'm fascinated with the way he tracks down Oldrich Vasicek the creator of the famous mathematical model that is at the core of what happened when the housing bubble burst.
The importance of Vacicek work is that it led to the creation of the Moodys Analytics which did much of the work of applying the model's pure mathematics to pools of mortgages that were used to leverage the worlds monetary system into the crisis that began in 2007. In very simple terms Vasicek's model was originally aimed at pricing interest rates at a given point in time under  the influence of mean reversion. Basically it assumed that when rates got out of line the markets would exploit the arbitrage opportunity to reprice them and make a profit. Why is that important? Well think about bonds and therefore mortgages as a derivative of interest rates. The market prices these through a process of adjusting interest rates applied to a particular instrument by applying a risk factor. Now when that factor is too big, say when a company invents a new widget that makes so much free cash flow that its' probability of default declines then the market buys its bonds knowing that the original interest rate is now out of proportion to the then perceived risk. Obviously the converse is also true. Now think about what happened in the mortgage markets. The banks looked at their mortgage books and started to work out with the available historical data what the likelihood was that a given sample of mortgages might default . . . say mortgages in a particular geography and of a particular size. They thought that if they pooled enough mortgages they could safely define the risk and manage the defaults in such a way as to create an asset that could be priced and traded according to one's appetite for risk. The rest is history and a great reason to buy Faisal Islam's book.

While the world continues to reprice risks life goes on and in much of the world we're coming to the end of the Q2 reporting season. This is how the S&P 500 looks according to data group Factset: 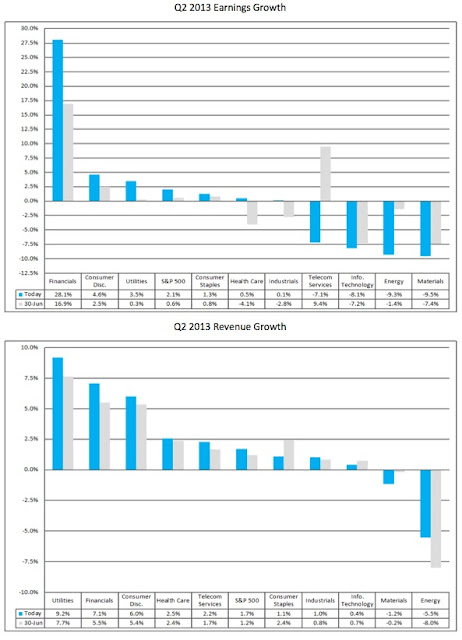 If the financials reverse course because of money tightening can the rest of the US economy pick up the slack. Remember that the reason the Fed is pumping money into the financials is to supply funds to businesses in need of capital to survive and propser. Judging from these numbers one wonders whether that operation has done anymore than keep banks going and inflate the share market unreasonably. I remain optimistic that the world will grow, but somewhat sanguine on the chances of avoiding shocks during the tapering period.

One potential shock remains in the PIIGS (Portugal, Ireland, Italy and Greece and Spain) where the German Chancellor is once again under pressure to take the lead in respect of a haircut on Greek debt. The problem is that Ireland in its zeal to reform has made it hard for Europe to treat the Greeks as an exception even tough the economy there is very unlike that in Ireland. The Greeks don't have low business tax rates, favorable cultural and structural advantages that allow them to grow their way out of the crisis. That of course is the problem with the EU and in a way brings me back to Vasicek's model. Europe assumed that the default rate amongst countries would converge as the economies came under control of Brussels, but even at the optimistic zenith interest rates in Germany and the north always traded expensively compared to the south. The European arbitrage implicit in academic assumptions of financial asset pricing have not worked because the countries and in some cases the provincial differences are just too great (think north v. south Italy, Scotland v. England, or even east and west Germany etc.). The wholesale printing of money by the ECB in itself cannot and should not make that arbitrage a reality such that a house in Athens or Naples should cost the same as a comparable house in Hamburg or London.
Housing in Spain is going to start clearing its backlog. We know that the ghost towns of the south are being sold starting soon. The Spanish will have to wait another 3+ years, as the Irish did, before the benefits start to accumulate. Their main advantage is that the north will still want to retire in the south and barring global warming Spain will become the Florida of Europe. Maybe events such as the Vuelta will help. I've subscribed to the Eurosport / Velocast podcasts for all the GT's this year and have thought the £50 was money well spent. 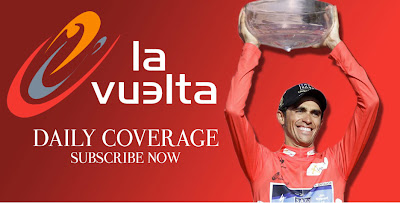 You can still subscribe for the Vuelta podcasts for only £15 and get the joy of listening to the guys daily review and preview of the goings on in Spain. I highly recomend it. And for those thinking about a Spanish investment it might just help you take the plunge . . . even if you are only thinking about bying the top of the range Orbea Orca rather than a palatial beach house in the south.