Somethings change and some things stay the same . . .

While on my way to another of local brokerage firm BBY's "Disruptive Lunches" today I'll be thinking about Fed President Janet Yellen's latest remarks regarding the US economy. As someone who is somewhat under employed at the moment it was no surprise that Yellen made a point of over-capacity  / under utilisation within the labour market. The headline unemployment rate in the US is 6.3%, but that's not 6.3% in the pre-2008 sense, thats long gone and a primary reason why the Fed is still buying back securities in an attempt to stimulate economic activity. That's the reason we're now clearly in a post-inflation world, how else can you describe the way the Fed pays so little attention to the CPI (above 2% in May from a year ago)? I know the Fed prefers to use the index for personal consumption expenditure (1.6% in April from a year ago), so investors just need to understand the push pull in a policy sense between the two numbers. Thats why Yellen spoke of a pick-up in domestic demand, but not of this being unsustainable. Clearly the Fed believes that a moderate tapering well into 2015 is still their preferred track and as such I'd expect equity markets to continue in fairly narrow, but upwards path for now.

In Australia the banks will continue to benefit from dovish central bank attitudes and I note that while rates remain low I'd expect them to continue to revisit the global bond markets to supply their balance sheets with the necessary finance to support the Australian housing market. My main concern with Australia is the narrow focus of their activities. The performance of housing and the reasonably benign condition of our own labour market continues to see them reach an easy return on their carry trades (offshore finance v. local business spread). I had a meeting with a senior HR person at one of the international investment banks here in Sydney and they agreed with me that since the GFC bankers had become more "siloed" in their focus as they try to cope with head office compliance demands. The days of having a premium value as a multi-disciplined member of a team have passed at the mid-levels with only the upper-management being able to move easily across product lines.

In cycling terms, as a banker I'm more a General Classification rider in a peloton that prefers to be composed of single disciplined teams. Thats why todays BBY lunch will be refreshing. The great thing about dealing with maturing start-ups is there are still so many paths they can take both with their product and their business structure. Today we'll be hearing from four companies:
Catapult will be the one most familiar to investors from watching sports. They're the company providing live performance data to coaches and professionals via those little bumps you see outlined just behind players shoulder blades. They're fairly well established now and you can see them across the globe. I'll be interested if they're going for a exit via a float or whether they'll prefer to keep it private and raise money to finance expansion. I don't know the management team or the shape of their balance sheet, so I have no idea how scalable the product is with their current infrastructure, but I'll listen and learn today.

For someone who spent a lot of time watching the Tokyo real estate market over the years I'm betting Divy Parking could be quite interesting. In the Japanese capital there has always been a problem with the aggregation of building sites. Thats why something like Roppongi Hills took so long and was so expensive to build. Wander down a side street in Tokyo and you'll immediately be struck by the limited width of the building blocks. On these are what is locally termed "pencil" buildings. Like a giant game of monopoly the major real estate developers (Mitsubishi Estate, etc.) spend years accumulating a row in order to demolish them and rebuild at opportune moments. In the meantime those buildings are difficult to use in a modern commercial sense and require a lot of "horse trading" to maximise their revenue stream. Aggregation therefore is a significant business and in Div's case they are used as a central clearing house for disused parking spaces in buildings. A great idea for landlords with neither the time or infrastructure to make such an offering. I know that the building I used for the Sydney office of the hedge fund I was working for in Sydney in 2005/06 had a number of free spots because the owners couldn't readily administer them economically. My bet is that today they'd go to Divy and hand them a half a dozen spots and pay them a good margin to up their income. It makes so much sense.

This week I went for a change in my exercise regime and got back to the gym under the guidance of a trainer in an effort to improve my performance on the bike. Sometimes it's too easy to do the same old things, which is a trap old bankers often fall into. As such I was put through a not to gruelling, but somewhat different weights programme aimed at strengthening very specific muscle groups for cycling: 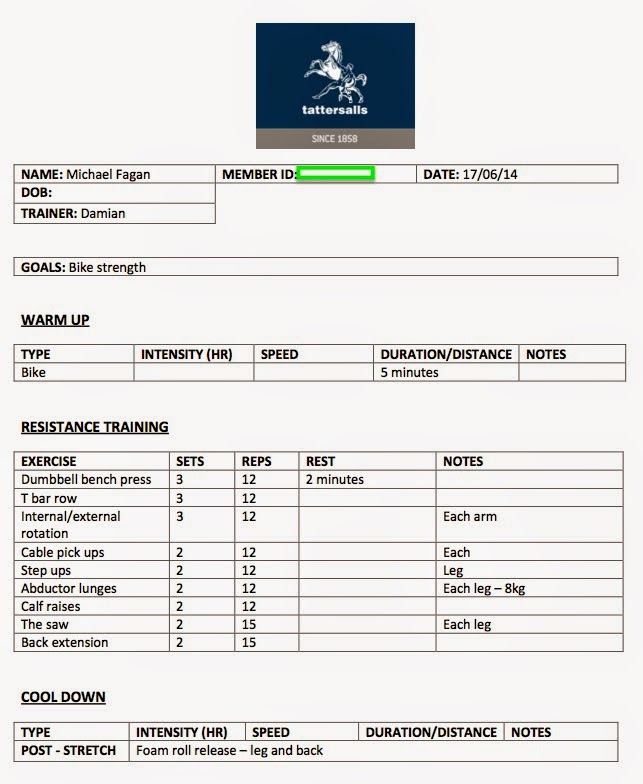 A lot of these are familiar strengthening exercises with added resistance from weights or a particular piece of equipment. I feel a bit sore after the first session, but I'm told twice a week and the muscle groups should make the adjustment.