You can either go with the flow and do things as they've always been done or you can try something different. After my blog last week I was kindly invited to a lunch looking at some private Australian based companies looking to disrupt old business world models with new technology.

My favourite of the four companies presenting was power meter specialist WattCost, probably because if you're anything like me you've become quite concerned about the spiralling cost of power.

David Soutar (CEO and Founder) & team have come up with a gem of a device that connects to both old analogue power meters and newer digital models. You don't need an electrician, just a wireless internet link and you'll get access to some quite clever algorithmic technology that will most likely see you repay the $99 dollars you spent in short order. You sign up and install the unit yourself. Complete  a questionnaire about the appliances you have and some other details and you're good to go. The algorithms do their magic to the extent that not only can they see how much you use, but which appliances are using it and at what time of the day. In fact they say they can even tell what cycle you're running your washing machine or dishwasher on. The really smart thing is that you'll get a text message saying you put the dryer on at the most expensive time of day. You'll even be presented via app with suggested supplier alternatives and potential savings. The company gets paid by the suppliers when you switch, but there's a lot of other potential revenue sources. In Australia and the UK expensive government sponsored smart meter projects had enormous cost blow-outs and already look like old technology compared to this. The privately held company looks set to do deals in various jurisdictions including California. You've got to love a company that makes governments look like donkeys . . . right? Investors look out for this one when they finally get around to going public.

In between watching Chris Froome debut his new Pinarello at the Criterium du Dauphine I've been working on some more consultancy based enquiries including revisiting some older vol structures and dividends swaps for investors. It''s amazing that even with higher regulatory hurdles and increased capital costs that you still see pockets of innovation in a wasteland post the crisis. I remember in 2000 being presented with a double barrier knock-out structure on the N225 that seemed like an impossibility to price without most of the candidates from Imperial College London's post graduate programme in pure mathematics. Of course that didn't last long as Monte Carlo made its way swiftly from the main frame to the laptop and so today we're looking once again at variations on a theme. I'm going to start calling it the IB Cyclist law of extended derivative markets ... the first of which will be:

This doesn't mean that you shouldn't want to be involved in the products in questions, only that the conditions that caused the engineering behind probably started to decay the moment the first structure was sold. Another example was the range accrual options in places such as HK that sought to pay investors a return above bank deposits if a nominated underlying traded within a range. Of course when volatility went skyrocketing in 2007 - 2009 those products cost the owners quite a chunk of change. That didn't wipe them out, but it did deflate their returns and the breadth of the market involved. They're back now and probably a good investment over the last couple of years as vol as an asset class continually fell. I could go on about what I've seen in Japan where the market because of terminally low rates and an inherent need for positive carry has always been at the forefront of "conditional" derivative type structure.

So leaving the world of barrier options I want to predict that the Tour de France is going to be an absolute cracker this year if the fireworks we got on Stage 2 at the Criterium du Dauphine yesterday is anything to go by.


This is proper cycling with Froome absolutely burning every one of his team mates in an attempt to shake Contador and crush him before the Tour. You have to love the response by Contador, he just stuck to Froome. I wonder what was said between them? "Bert" just sat on Froome's tail as though to say he was back this year and that he wasn't going to allow the "Sky-train" the dream run they got last year. If you're in Geneva right now working on your latest commodity deal at one of the big funds I strongly advise you to find an excuse to cycle or drive out and catch the final stage between Megeve and Courcheval this coming Sunday. 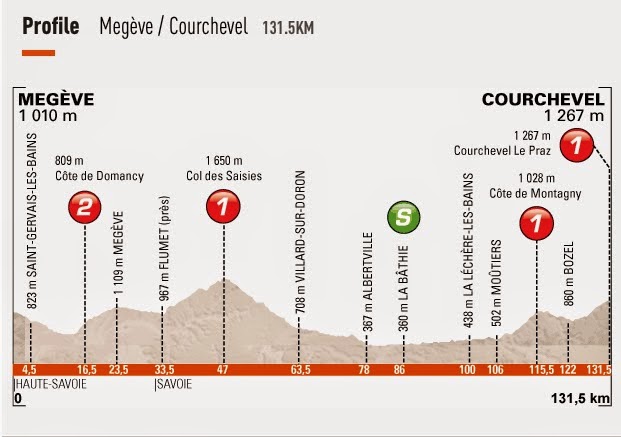