Always arrive early for presentations at investment banks. For that matter always arrive early in airport lounges, shareholders meetings, lawyers offices and even at your accountants. I'm not just saying that because of the fascinating magazines and journals available to you at such destinations, but rather because you get to see and hear and even discuss the most remarkable things before anyone else arrives. Once the "crowd"enters everyone's guard goes up and people step into their usual roles, but be there first and it's like watching politicians and journalists discussing things off the record before the lights go on and the cameras roll. Trust me you won't be disappointed. And not to make too fine a point of it, if you enter a room on a mobile phone discussing an important deal always assume that who's ever in that room is a competitor, so either exit the room or finish your call. Do not be like the Merrill Lynch banker from their NY office I once sat with in the Singapore Airlines Lounge at Changi Airport who decided to discuss at the top of his voice the pricing of a new CB for a Taiwanese company. That will end in tears.

Yesterday provided me with another value added example of why to arrive early for a presentation. As I said on my previous blog I was attending local investment bank BBY's "Disruptive Lunch" looking at some pre-IPO tech companies. When I arrived there was no one in the room and the receptionist had to step away so I waited patiently for things to kick off. The next person in was Adir Shiffman, Chairman Catapult Sports. Now if you're anything like me you know how difficult it can be to get your questions answered during group presentations, so an opportunity to get 10 minutes alone with someone like Mr. Shiffman in an empty room as you wait for the crowd is worth it's weight in gold. It's not that you get any information extra, you just get to drill down a bit, especially in tech about how things work. I think he liked that I knew they had good penetration in the US and when I asked him about this years number 1 draft pick in the NFL Jadeveon Clowney and his perceived propensity to take a little personal time out during his games at the University of South Carolina. He obviously wasn't about to tell me anything confidential, but he did explain to me how player "load" was their core measure etc. Having example like that really allowed me tot skip a step when the formal presentation started. See what I mean . . .always arrive early.

It's also rare you get to meet someone likely to be at the head of a company that you know is going to end up either getting taken over for a billion dollars plus, or going public with a similar valuation. Trust me, when you hear the story you'll know it straight away. You have to hear a touch of arrogance from the management that comes from a real focus and confidence in their product. It's magic when you see them later in a room rattling off questions to themselves before the crowd is able to formulate the obvious. And it's even better to see them bat away badly contrived queries based on old economy prejudices.

So what did I learn? I learn't that my Strava account is like using a typewriter in the presence of Steve Jobs. I also understood from my own interest in the media sector that the amount of cash trickling down to the coach / player level is exploding. Consider the fact that The University Of Texas has its own "Longhorn" TV channel , as does a number of others. The football at UT has revenue north of $100m and there's plenty of others in the NCAA with similar numbers. So a team buys a subscription from Catapult for about $130k a year per year for 3 years. I don't remember from the presentation whether the team has to pay the hardware cost, but its minimal per unit anyway. In return they get access to the algorithmic analysis software that allows coaches to see anything from basic (lets call them Strava) numbers, but more importantly some advanced sports science metrics that allow them to drill down on even how likely a player is to suffer soft tissue injury because of the state of their player load. In Australian rules football and in soccer they have the ability to put sensors in the balls now and you can imagine the extra analytics that this gives you. In fact next time you watch live sports and see the coaches looking at laptops they'll probably be looking at Catapult analytics. On Saturday when Australia play France in a Rugby game watch when substitutions are made . . . they're not solely made when someone just looks tired or is playing badly, the coaches can actually see in numbers that the players are becoming less effective, or that when they hit a certain level they're more likely to get hurt than to contribute. It's fascinating and when you consider that Catapult have half the NFL, lots of College's including this years national champion Florida State, a vast array of soccer teams in Europe, and all the major football codes in Australia, to name just some of their markets and you'll quickly understand that the real key to the business is the database.

Catapult own the data. You don't need to be head of high frequency trading at Goldman Sachs to know that your algorithms are only as good as your database. So, if you're the Dallas Cowboys and you want to gauge the effectiveness of your players against the best in the league Catapult have the metrics for you. In fact I should have asked whether the pro-teams can buy the college data of he prospective draft picks they are scouting? I assume they can . . . and watching Mr. Shiffman I'm betting that it is, or will be monetised at some stage. The possibilities are endless. And when Catapult  get around to it I'll be t we see a trickle-down to weekend warriors like me. I mean I already ride with guys who have power meters as well as the cheaper heart rate straps etc. Imagine they actually had proper analytic tools? Yes this is a company to watch.

Unfortunately for investors unless you're already in a private equity fund that has participated in Catapult's capital raisings it's unlikely in my humble opinion that you'll see this one get as far as going to the public markets. If Apple paid $3bn for beats I just wonder how long it takes someone in fortress Cupertino to wake up and write a cheque before Nike, Under Armour et al smell the coffee brewing? Now just let me grab a suit and tie and ticket to San Francisco and cut me a cheque and I'll happily bang Tim Cook's garage door down.

Many thanks to the BBY team for arranging the presentation. I'll be blogging about the other companies over the weekend so readers may like to look out for that.

I think I was feeling particularly unfit after hearing the Catapult story, so I headed out on a cool Sydney winter's morning for a ride in a new jersey. I have plenty of winter clothing from my time in Geneva. My favourite winter outfit in Geneva usually was topped-off with an Assos Airjack 851 riding jersey, but to be honest that is just overkill for 99% of the winter in Sydney. 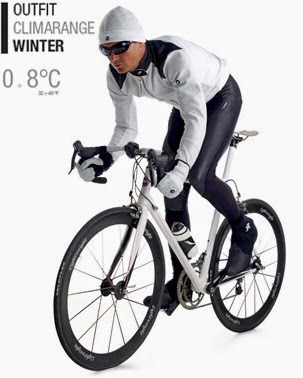 Last year I also tried Castelli Mortirolo Due Jacket, but it was perhaps a little close fitting for my liking. 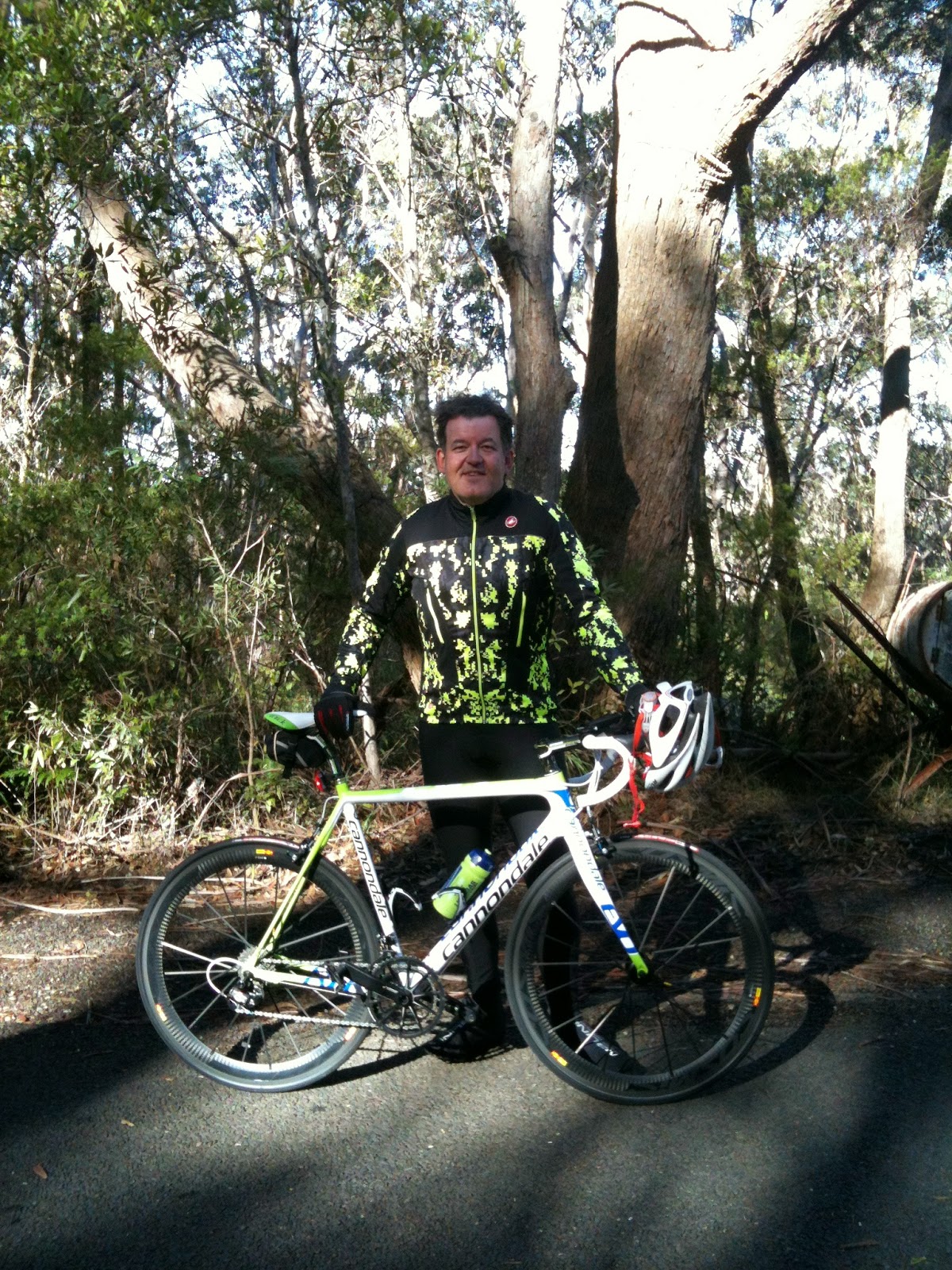 This year I've gone back to my favourite brand Rapha and bought one of their winter jerseys.

I got mine at  small discount to normal retail through a special offer (AUD200), but you can get one even cheaper now due to the cycling industry being driven by the northern summer, rather than the southern winter. I got mine in a blue as I really don't see the point of wearing a black jersey in the dawn or twilight hours of a Sydney winter. 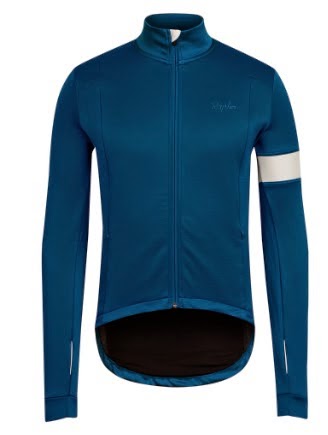 The jacket comes in a soft marino wool blend and if your own a classic Rapha long sleeve jersey you'll immediately notice the additional weight. On the back the usual 3 pocket configuration is changed to two pockets and a larger zipper bin that I tested and decided it was perfect for a folded rain cape. Of course you could use it for other things, but the size suggested clothing "bin" to me. The other two pockets are larger than normal and somewhat deeper. In fact I found the back length of my XL version longer other all than the classic long sleeve version. 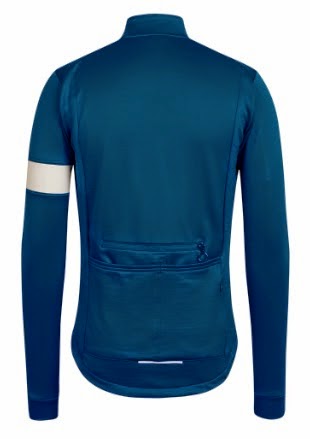 At the front of the jacket are two almost invisible zippered air vents which open about a half the length of the torso and are backed by mesh when in that position. the interior is lined, much like my AirJack851 to stop the wind hitting you full on.

During this morning ride the conditions were not overly cold at around 10ºC, but I wore the jacket anyhow. The fit was generous, overall a bit loser than the classic jersey. If you like it tight go a size down. The collar is also higher and softer than normal. Once on the road and going up the first climb of the day out of Rose Bay I was regretting the Jersey choice as the weather was getting more mild as the sun started to come up over the harbour. I opened the vents and all was good again. In fact the size of the vents really enabled me to forget about being too hot and concentrate on thumping out a cadence. By the time a swung back for the stretch south through the beaches (Bondi, Tamarama, Bronte and Clovelly) the wind picked up off the cold sea and I zipped up the vents and felt warm and cosseted as I rode back towards Sydney's centennial Park and towards my morning coffee.

Overall I liked the Rapha jersey alot and although I'd say ideally it's better suited to the 4 - 10ºC range it's not overly stifling a couple of degrees warmer when you open the vents. I think the storage "bin" is fantastic for carrying my rain jacket, although it would want to be closer to freezing if you were wearing a rain jacket with this one. The Assos AirJack is best for -4 - +6ºC. The Castelli Mortirolo Due Jacket is more 0º - 8º. I think the Rapha is a little more useful for Sydney conditions and amongst these three premium jackets/jerseys is definitely best for we cruiser type riders due to the cut. Invest in one.