Sometimes the cycling and investing gods get angry with you and when that happens you need to keep your head down and cut your losses fast.

This morning it was the cycling gods who woke up angry with me. I was out the door at 5:45 and cruising the beaches of Sydney. Unfortunately things turned bad when I was climbing out of the valley that is the Bronte Beach area of Sydney. A piece of building wire got spun up into my rear mech and tore the best part of $500's worth of Campagnolo Super Record rear derailleur clear off the back of my Cannondale SuperSix Evo. Here's the result: 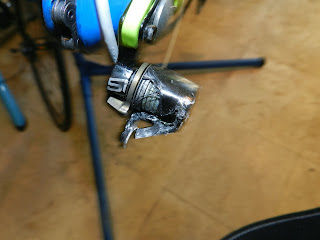 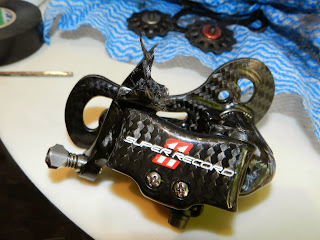 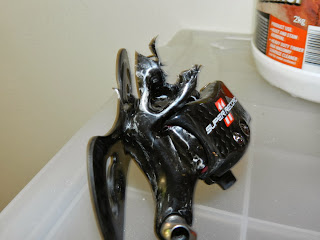 The one question that I'm asking is why the $30 derailleur hanger didn't bend or break? I thought the idea was that it broke and saved you what happened to me. Go figure . . . ???

Federal Reserve Bank of New York president William Dudley threw some economic debris on the road of financial markets yesterday when he set out two tests for a taper to start:

The FT had this quote today:

“Assuming no change in my assessment of the efficacy and costs associated with the purchase programme, I’d like to see economic news that makes me more confident that we will see continued improvement in the labour market,” said Mr Dudley. “Then I would feel comfortable that the time had come to cut the pace of asset purchases.”

We'd all like Bernanke and the team to put hard numbers on what they mean, but economics is usually under the umbrella of humanities and not sciences at most universities and therefore it remains more of an art than the markets would like.

Recently I wrote about my surprise about the VaR numbers some banks were running currently. UBS for instance ran a VaR of less than CHF50m on average during the last quarter and it shows in their trading income. That of course is something the market is willing to pay for with better shareprice performance. This blog doesn't see risk as an anathema to sensible banking, in fact it's necessary in order to correctly rank and price financial instruments.

I was somewhat surprised by Deutsche and Barclays reliance on trading given the travails both these institutions have gone through. Maybe I should cut Barclays some slack as they never went to governments for direct support in 2008-9, though they like all banks, got plenty of Central Bank help indirectly. DB though probably still needs to raise capital (tier 1) in order to meet the Basel III requirements. So what do we conclude? Risk taking 2006-7 style is not back, but some banks are not running from the benefits of well maintained trading books. Markets are brittle when it comes to risk . . . as brittle as my rear derailleur . . . we all want better RoE, but few want to be associated with what it might take to get there.

Finally on this rather expensive day it would be remiss of this blog not to mention the changes at Blackberry. Few in finance have not possessed a Blackberry, that indispensable tool of the pre-GFC Investment Banker. It looks as if there are still some prepared to take a risk on the Blackberry architecture (as opposed to the hardware) and are looking to take the Canadian Tech leader private and rebuild it's business by leasing out its' guts. Notable is that the buying syndicate is composed of non-Investment Banks. The hedge funds and private equity groups operating today are full of refugees from the golden towers of Wall St and the City of London. Maybe this is how it should be, because if these institutions go under they are less likely to be systemically destructive and more likely to provide lessons on risk assessment for future generations of economists and bankers. The problem right now is that we work in a risk vacuum and that in itself will soon be tested when central banks start to withdraw stimulus.