How would you feel if someone announced that you were not going to take a job and the investors in the company that had been looking to hire you celebrated by buying the company's stock? That's what happened a week a ago when the  markets cheered Larry Summers pulling out of the race to be the US Fed's next President. Janet Yellen now is the favourite to continue the Bernanke legacy and the reason why the markets cheered originally was because Yellen has been the most dovish member of the current Fed Board.

This blog wrote about the possibility that the Fed would hold off on the taper that everyone had predicted to happen in September some months ago and therefore was not surprised by Bernanke's failure to slowdown the presses. Right now we've reached a critical point where to paraphrase Shakespeare:

I am in money
Stepp'd in so far that, should I wade no more,
Returning were as tedious as go o'er:
Strange things I have in head, that will to hand;
Which must be acted ere they may be scann'd.
(Macbeth Act 3 , Scene 4)

The taper now is likely to start next month depending on the Non Farm Payrolls. I'd be betting now on a decrease in the stimulus of about 20%. The Fed will not cease all stimulus overnight. Bernanke knows that he has to give the market a chance to bounce back from any shock, no matter how marginal that is likely to be. The most significant move you make in investing, business or in sport is what you do immediately after a mistake. We'll be able to tell more about the "greatness" of the current Fed after the next move than we know now.

I had a meeting today with some friends from Europe. It was interesting to listen to someone not so invested in my current home country. The investment line from planet Europe seems to be that even though the US has had a good run it was not exactly the time to go all-in on broader European equities. As this blog said recently I remain bullish on US dollar assets, but willing to give central Europe (ex-Germany) a bigger allocation of funds.

Another subject we discussed was Japan. Now normally I prefer to look at Japan as purely a function of a leveraged play on the US, but with their "unlimited" money supply out of sync with the situation we've seen in previous cycles it remains to be seen whether the old axiom of tracking the yield on the US 5 year T-Bond remains true . . . i.e. Yield-up indicates US growth and therefore demand for Japanese products . . . therefore buy the N225. 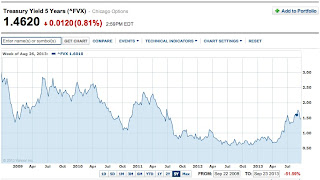 The UST 5year price fall / yield rally was stopped in it's tracks by the Feds continued money printing, but now given the assumption that the Fed will start a moderate taper I would be reluctant to sell Japanese equities holding outright, unless of course I was trying to flip into an even more leveraged play in the shape of a market like South Korea. Having said that picking an Asian winner at this stage is going to be as tough as investing in India . . . FWD . . . Fraught With Danger.

Since the last published blog Australia has had a change of government and a rally in the AUD. Investors need to know that while the AUD looks to be a pro US stimulus play it is in fact  likely to lose much of its' correlation as the new centre-right government starts to face the fiscal hole left behind by the socialists. The first hole they have been facing has been the hugely overblown National Broadband Network (NBN). The original plan was to roll out fibre to everyone's house and then charge both the content providers and the end users to use the infrastructure. The problem of course with the plan was the fact that Australia is the size of the USA, but with 10% of the population. Therefore the cost of rolling out fibre to everyone's door is astronomical. The original $30bn budget has been long since ditched and now so too will be the monopoly structure of the NBN Co. And this is only one of a handful of projects that need like played out oil wells to be plugged and abandoned. In the meantime the revenues continue to fall and the AUD in it's recent short rally will do nothing but lead the Reserve Bank of Australia and the government to do the following:

Amazing scenes from the cycling world titles on Sunday. The Team Time Trial was won by Omega Pharma Quickstep by 0.81 of a second. That's just way to close over an hour of cycling and ultimately heart braking for the 2nd placed Orica Greenedge team who have duelled with OPQS all season in these events.

The winners averaged 54kph over the course, which is frightening to think of if you've ever been on a bike on a flat course for an hour. On the weekend I was coming down a 10% hill and only reached 55kph before I backed off, so I can't imagine the speed these guys are able to do. The OGE team riders will have to show some "bounce-back-ability" now as they head into the individual time trial and elite road race and forget about over analysing their ride on Sunday. There's no pint in looking for a critical error when it's that close because all it takes is a slight shift of a dodgy piece of road to knock off the sort of time we're talking about. Thats the thing with cycling on the road as opposed to on a track . . . things are not the same for everyone . . . you just try to minimise the problems the best you can. The situation is the same in investing: don't try and over analyse for an extra single percent of return when you've already achieved your original goal. the margin is just too fine for everyone but the most perfectionist of "riders".