It's easy to imagine that there's a lot of confusion in markets right now, especially so given the potential risks of involvement in the Syrian debacle. Volatility has been rising leaving investors somewhat exposed to the vagaries of the market. Over here in the Asia Pacific convertible bonds are back on the agenda for financing business. Think about it this way; rates are low and volatility is high. Put these two aspects together and you can get some unbelievable financing deals for your business. Take for example US listed Chinese IT company Qihoo 360 Technology. They issued $600m worth of CB's with a coupon of only 2.5%. The stock is up over 180% this year and to convert the notes it will have to go another 40% higher. Interest on the notes will be payable semiannually in arrears on March 15 and September 15 of each year, beginning March 15, 2014. The notes will mature on September 15, 2018, unless previously repurchased (there's a put option for the CB holder), redeemed or converted in accordance with their terms prior to such date. I'ver never looked at the Qihoo balance sheet, but my guess is that they aren't going to be able to get money at 2.5% at their local bank branch in China. That is the biggest ever CB issued by a US listed China based company, provong once again that a little clever maths can help a business get a better deal.

Given the above I thought it was an extraordinary piece that was published in the Financial Time's Lex column over the weekend. I'm not sure why Lex decided now to warn investors about the dangers of spreadsheets, but they did:

"The era of Big Data is here. More powerful computers make it possible to analyse the oceans of information gathered by barcode scanners, mobile devices, security cameras, credit-card readers and so on."

On more than one occasion this blog has mentioned the importance of ol' cell A1 when deciding what M&A deals did and didn't get done. I refer to cell A1 euphemistically of course because I personally always started with my funding assumptions up there at the top left of my spreadsheet. It will forever remain the case that a slight tweak in the cost of capital has a huge effect on what banks do an don't do and to a great degree it's that cell that CFO's need to be on top of first and foremost if they are to see their institutions thrive. 20 years ago funding was somewhat more certain as the sources of capital were limited. Today of course funding is again somewhat constrained. The Fed, BoE and ECB amongst others have through various forms of QE been underwriting the banking system in the hope that these ultra-low rates will filter through to businesses.

Given the above spreadsheets have filtered down to SME's and should in time enable them to be more precise in how they deal with the questions of maintaining and running their businesses. For a long time now the mega government projects have been dominated by companies with the wherewithal to finance contracts to the satisfaction of governments. The SME's of course have always taken sub-contracting rolls and have had to fund these via overdraft facilities that were onerous on their returns. Now I would suggest that SME's could go around traditional sources for funding via their own version of a PPL in which they effectively go to the public (and public institutioins) and swap some of their performance versus a benchmark contract level for funds at a cheaper rate. If we assume that interest rates stay low for the next few years (even with the threat of the taper in the US) this should allow them to be involved with bigger deals at better rates and return a portion to a yield hungry public. They probably can't issue CB's in the normal sense, but there are alternatives. The key of course for them and the investor is the spreadsheet and that cell numbered A1. Imagine what a syndicate of like-minded SME's could do if they successfully co-operated in such financing. They would effectively be able to challenge the hegemony of several mega infra-structure suppliers and be in a position to bring down the cost to the governments looking to build new infrastructure. It's just a thought, but should serve to counter the surprisingly negative connotations of Lex this morning.

Imagine the best cycling weather possible. Now imagine the perfect course. Where would you be? What bike would you ride? Who would you ride with? If Sydney remains somewhat hostile to cyclists in general it does of course have the compensation of providing absolutely sparkling days. On the weekend I rode both alone and with a friend and even though I was slugglish when I set off on Saturday morning the fact that it was the last day of winter with not a cloud in the sky and a temperature that climbed from 16ºC to 25ºC over the course of the ride meant I still had enough positive energy to get home with a smile on my face. 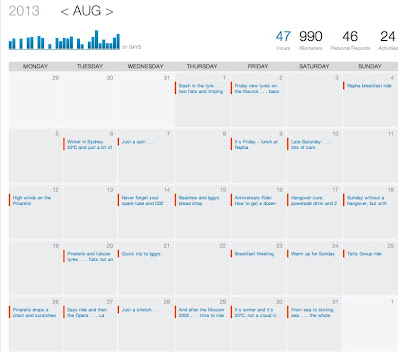 For the month I rode 990kms in 24 rides and spent 47hrs in the saddle. I'm slightly dissappointed that I didn't get to 1000kms for the month, but honestly when I stopped after 60kms on the 31 August I'd had about enough. Thinking about it I'd say anyone living in a city of 4million people who's able to find the room and time to ride a 1000km+ in a month is either a genius, crazy or both. I guess I'm close to one of those, but not sure which one yet.

I was interviewed by the Sydney Morning Herald last week. The article was on the continuing wars between drivers and cyclists here in Sydney. The journalist only used one anecdote from me, but I hope it helped people understand what you go through riding a bike in Sydney:


Michael Fagan reckons he cops abuse about twice a week over his preferred mode of transportation. On a scenic ride through the eastern suburbs from Darling Point to Centennial Park early on a recent weekday, the financial consultant encountered a ute whose driver became exasperated with the cyclists' speed as he tailed him through a roundabout.

The driver conveyed his impatience by leaning on the horn. Then he conveyed it again, in words: ''I'll slice you in half, you f---ing poof,'' he yelled.

''That's the intimidation that goes on all the time in Sydney,'' he says.

That's why I'm trying to sign up for some well organised events over the summer. For those of you asking here's my target list:

I want to do the rides connected to the Tour Down Under, but it looks like I'm going to be in Europe at the end of January. I'm looking for some events in December, but might have toventure as far south as Melbourne to get a good ride. Anyone with further suggestions please contact me via the usual channels.