I defy anyone sitting in last Thursday's Disruptive Lunch at BBY in Sydney to correctly outline to me how the proposed computer chip from Brain Chip (http://brainchipinc.com) actually differs from current technology. Probably like me, if you were taking notes, you wrote down something like:
It all adds up to my personal conclusion that I'm going to need a bigger brain. Brain Chip is offering a technology that for 99.99% of the population only exists in science fiction. Robert Mitro (CEO) claims that the technology developed by Chief Technology Officer Peter Van Der Made (see his new book: http://higherintelligencebook.com) is perhaps 25 years ahead of anything else currently available to industry. The chip will have the capacity of 10,000 neurons. That means little until you understand that the human brain has 86 million neurons. A fruit fly has about 3,000 neurons, which means if you're interested in the sounds that this fly species makes it should be possible for you to have the chip learn all the characteristics you need to build a detector. It's difficult to explain because Brain Chip is proposing something that is such a revolutionary leap that it comes under the heading of "if you build it they will come". I thought the best question of the day was "what are the limits of the chips learning potential? Say you had the chip learn how to hear like a human. Wouldn't it just keep learning until it had some type of superman like capability?" The answer was slightly ambiguous in that Mr. Mitro said that BrainChip sold the kit, but didn't set the boundaries of what the user could do with it.

According to the time-line, there's two years and $6m dollars between now and producing a chip. In between now and then it seems we'll see an example of the chip in action via the form of a car racing game that learns to drive itself. Apparently Google has taken an interest, as have various neuro-science bodies in the US. I asked Mr Mitro after the presentation whether that $6m figure was correct given just how revolutionary this was likely to be, and he stood by his statements. As an investor, I think it's right to be sceptical. To me, what Brain Chip is proposing is so big picture that it tests my limits of understanding. If you've spent too many hours reading Asimov then welcome to a new reality. This is the proverbial game-changer if they pull it off.

I felt far more comfortable when Hugh Geiger from Ollo Wearables (http://ollowearables.com) stepped up to the mic. The company's focus is on tech solutions for the aging population. It's a familiar theme at these lunches. I first encountered the business opportunities of a demographic shift in the late 90's when the Japanese equity market started to throw up vague ideas of baby-boomers retiring to the country to fish, play golf and ride bikes. What we didn't think of then was the tremendous drain this would have on government and social support structures. Ollo Wearables is looking to fill the gap in the market that exists between conventional communications solutions and fully managed aged care.

Ollo is focused on voice-centric solutions. Geiger comes at this from a familiar angle; he had an aging relative hurt in a home accident and was unable to get to a phone to alert the family. I've also had experience with this as one of my aunties slipped in the bathroom and died because she was unable to get help. Therefore, I can appreciate the Ollo's wearable communications focus. The technology focuses on voice-controlled dialling, but includes other software controlled sensors such as an accelerometer that tracks the wearer's movement and physical activity so that family members know immediately if the wearer has fallen. They'll also be other biometric sensors that will help build a picture of the state of your loved one. The device uses a conventional GSM transmitter. The key is the software's ability to put it all together. Ollo don't want to join the race to the bottom in hardware manufacture, but rather license their software. Mr. Geiger was sporting a star trek inspired necklace (produced by LG of Korea) that is similar to a device that was used recently for trials of seniors in Missouri.

Apparently the necklace provides the optimum compromise in terms of sensor and voice control. It's also an ergonomic issue, whereas a watch has problems both for use as a phone or as a sensor to measure falls, the neck has access to your voice centre, pulse (via carotid artery) and provides a better indicator for accelerometer measurements. Additionally the voice control functionality doesn't require the synthetic learning process that I've encountered with voice control in several cars I've owned. That's a difference maker when you are dealing with a senior citizen who may lack patience with technology. Put it on and use it immediately.

The revenue for Ollo comes from licensing agreements. The team has relocated to San Francisco. Ollo is a serious company and investors if given the opportunity should seriously consider any equity offering.

The first two companies were so hi-tech focused I think I'd burnt myself out by the time the joint CEO's for Posse (https://posse.com) / eCoffecard (http://www.ecoffeecard.com.au) / Beat-the-Q (https://www.beattheq.com) started their pitch. This one is a great example of something we're going to see a lot more of in the social media sector. This is a rationalization that is supposed to end, as so often happens with these things with a big winner. The land grab here is for 55,000 shops and about 500k users. When Rebekah Campbell (Founder and CEO of Posse) showed, a short video of what the new entity is all about my first thought was that I'm too old to embrace what I'm seeing. I don't have a copy of the video, but let me set it out for you:


All I could think was that Gen Y is going to kill the atmosphere at my favourite places. I'm already a little annoyed by people on smart phones. There's nothing more annoying than people on "ph-ablets" in low lighting environments "SMS'ing", etc. away. That, of course, is my problem, not Posse's. The problem for me is that the revenue model is based on up-selling establishments into the highest of three levels of analytical offering. If you own a café and have an MBA, you'll want to Posse to rationalize you're massive student loans and the 16 hours a day you spend working on your business. If you don't have the skills to use the stat packs, then Posse may make sense in a cost sense whereby you might save a headcount because of the self-service nature of the app. I remain sceptical on this particular segment. I have used eCoffeeCard and have recently signed up and reviewed a couple of local haunts on Posse (search: The IBCyclist Collection). 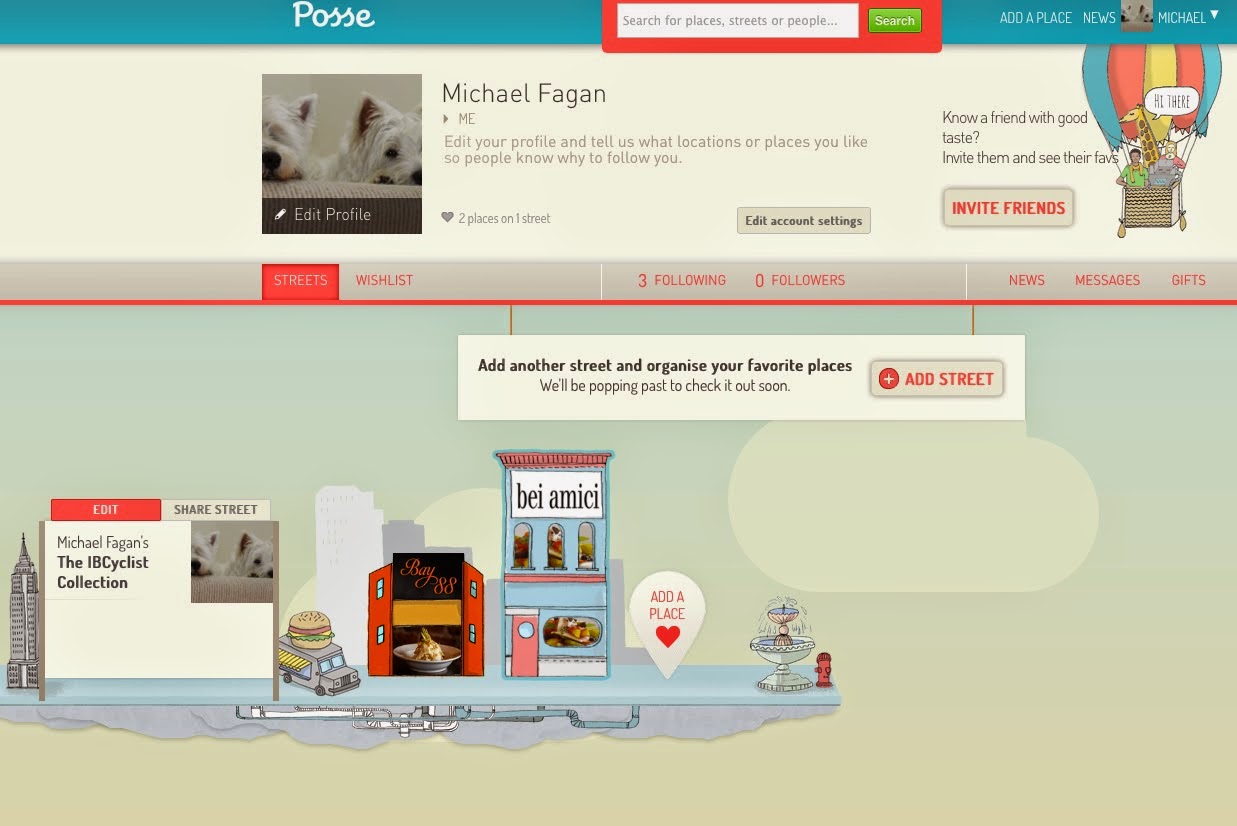 As an investor, I recommend not trying to pick winners in this market sector. Instead if you are committed to this segment you need to take a portfolio approach. I remain engaged, but not committed.

For those who've been wondering, I've finally taken delivery of my $450 Institchu suit. My plan is to review it after a couple of more outings. First impressions have been good. I went into the Institchu pop-up office in central Sydney to take delivery. I was surprised by how busy the space was, but the staff was friendly, although a little surprised when I said I wanted to try it on. The suit was delivered as specified by me except for the coloured felt I asked for under the collar. I'm not a particular fan of that particularly English affectation, but ordered it to test Institchu. It's not a deal breaker, but if you're fussy, it might be annoying. I did get working sleeve buttons and everything else I had specified. The suit came to me on wire hangers and the staff member needed to be asked for some type of covering for transportation, which was duly supplied. An acquaintance who took delivery via mail told me he was a little miffed that his suit was tightly folded in a box and needed pressing before wear. Look, you get what you pay for, and given the price I wouldn't quibble about the wire hangers or perfunctory packing. Please look-out for the full review soon.