The Friday US non-farm payrolls always get me thinking about things. This month it's particularly hard to analyse because of the extreme weather conditions that the north of the US experienced. Nevertheless the market was surprised by the 175k jobs that were created:

Why does it matter? Well the primary reason is that the Fed says it matters, so unlike Investec strategist Max King, who said on CNBC Europe on Friday that he doesn't understand why the market is "obsessed" with monthly U.S. jobs numbers as it does not tell the state of the underlying economy, I do understand its' importance in respect to the tapering cycle. Mr. King maybe a very good strategist, but simply put if numbers worsen then the Fed has an excuse to slacken the rate of taper and if they accelerate then the converse. It's cheap money that has the S&P 500 at record highs.

This brings me to the banks. I was asked recently about my views of the financial cycle. To me the economy works as a series of overlapping sine waves with different sectors reaching peaks and troughs at various times.


It's a simplistic view unlikely to get me into a doctoral program at Havard or Oxford, but it's illustrative of my point. Obviously in each sector the extremes are highly dependent on the leverage in the system at any given time when the cycle turns. In the case of banking and finance we saw that beautifully demonstrated in 2008 when Lehman Bros. went under because of massive leverage to the credit cycle. Even today many of the banks remained highly geared and in dire need of new capital to support the deleveraging. The Fed and it's central banking cousins have been key in this process. Part of the process has seen financial institutions be at the forefront of reducing staffing levels to balance the costs of running down their balance sheets.


If the financial sector starts to hire again we can reasonably say that at least the part of the equation that removed a large percentage of their headcount is over and that is indicative of an overall economic recovery. Janet Yellen is right when she worries about the recovery in jobs being based around part time employment or low participation rates, but if you believe Barclays CEO Antony Jenkins then you can see a change in the air. Jenkins told London's Daily Telegraph that:

" . . . he was forced to increase bonus payments to senior executives after hundreds of key staff left the investment bank in America and he feared a “death spiral” could grip the organisation.
Revealing the reasons behind the controversial decision to increase bonuses by £200m in 2013 despite profits falling at Barclays, Mr Jenkins said that he had to act or the investment division would suffer. . . . "

Now given that as many as 700 staff left the Barclay's US arm of its' investment banking division in 2013, which is double its' nominal attrition rate one can assume that the cycle is turning up. Shrink to grow has reached a logical conclusion in the financials and doe are starting to see the end game in terms of recapitalisation. This blogger thinks that sometime during the third quarter we'll see some major tier 1 capital raising and this will be the final signal that the Fed (for the US anyway) can step out of the QE market (ending 2015?) and rely on ultra low rates alone to support employment growth in industrial sub sectors. We shall see . . .

My own employment situation is interesting. I'm getting a few more inquiries about my services, so maybe things are looking up even in the Australian finance context. Having said that and especially after one meeting late last week I have to say that multi-national companies continually surprise me in terms of execution of strategy. The best companies usually have a strong core in that the management team knows exactly what they want in terms of product focus, management competency and cost structure. There are other factors, but I tend to focus on these. Why am I bringing this up? I went to an interview with a very well respected company's COO primarily because of their reputation, but if I told you we stopped the interview after 30 mins would you be surprised?

The COO in question was based in Hong Kong and the mandate for the position had been arranged through their local office in Sydney. I have no doubt that this gentlemen knew exactly what he wanted, but somehow those requirements hadn't quite got through to the Sydney team leader. Leaving aside my own position and the amount of time I wasted in getting my head around the opportunity, the question for investors in a company such as this should be how does a management team fail so obviously to communicate to a branch office? The best HR person I ever dealt with always wanted me to provide a full written spec for any position I was looking to fill. She used to say to me ""what's the one essential thing you want to see on this CV?" And I used to have to put that at the top of the page highlighted in bold. This got me to focus and it also meant that when my own manager wanted to know my plan he knew either I was in tune with the strategy or not. Occasionally we might disagree, but the very fact we had it down on paper meant we could have a full and frank debate on the direction this pushed the team I was running. Thursday was a classic case where someone wanted to go slightly off piste and someone else didn't; so instead of debating this internally they'd aired their own confusion in public via a headhunter and myself. I felt it was pretty embarrassing for the COO and he better hope that the regional CEO is not watching this closely, because if he or she is they need to ask questions.

Head hunters have a difficult job. They are not your internal HR managers. They're employed to fill a position . . . They don't get paid unless they get what the company wants. Conversely they have to be strong enough to say "listen, I'm not sure I'm hearing you right. You have never hired anyone without X or Y attribute . . . . Why now?" Maybe I'm being harsh, but I should have known there was an information gap between my headhunter and this mandate. No problem as I bet he'll never let this happen again. I'm not so sure I'm as certain about the mandate issuer . . . If I was an investor I'd probably stay clear of them. Live and learn.

After that interview I decided that I should get back on my bike and grind out some kilometers. I'm trying to smooth out highs and lows, like a good portfolio manager should and concentrate on the total return in my days and weeks. I managed to do just over 200km's last week in preparation for my annual Tour d'Orange next weekend. Last year a group of us spent the weekend in the City of Orange about 4hours north west of Sydney and it was a blast. For those who are interested I'll be publishing my rides next week and if anyone wants them I'll be happy to send the gpx files for uploading into your favorite route planner. Here's last years day 1 ride: 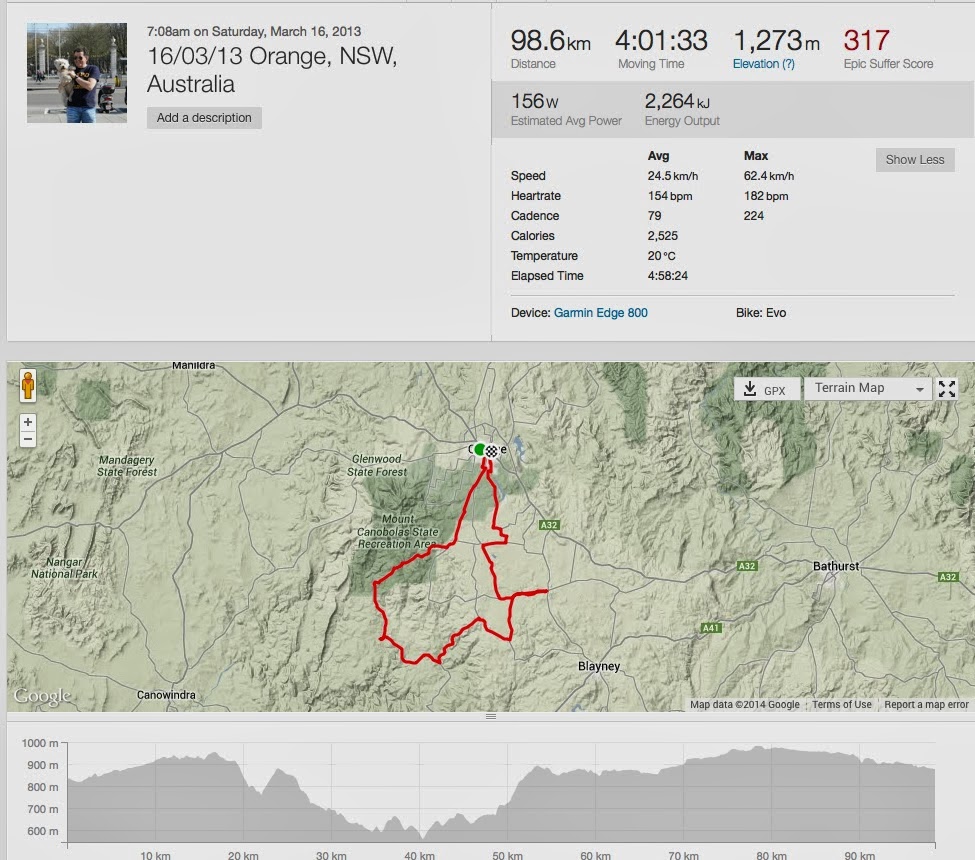 There's about 10k's missing because I failed to turn the Garmin back on immediately after we stopped for coffee at Milthorpe. I've got that problem solved now so you'll get the whole ride cleanly next time. Also I should mentioned I signed up for Instagram. This will allow me to take pictures along the way and in turn Strava will pick up those pictures and overlay them on the route map allowing you to see the views as I saw them. Nifty? Go to the below ride for my preliminary attempt from Sunday:

Just hit the little picture after getting into Strava.