A cycling tour and the bankruptcy that might not have been . . .

Being gainfully available for employment means that you have the flexibility to make yourself available for various events and causes. That means I've been asked to ride in a 12 hour "enduro" charity event in aid of Children's Cancer in April. Normally I'm not great one for exchanging exercise for causes, but my father who passed away from cancer had specifically referred to this particular charity as being his favourite. I guess going through months of fruitless treatment gave him a greater appreciation for the reality that cancer brings to lives of all lengths, but obviously there's a special poignancy to it all when placed on the back of a child who is facing a short painful life. Given this I really couldn't dodge it with a mere donation.

The reverse of riding for a cause is riding for personnel pleasure, as was the case for the last three days when I travelled for about 4 hours west of Sydney for my club's Tour d'Orange. This year we combined with a group of riders from the north side of Sydney and some local lads to ride a 68km prologue (Friday), a 110km group "sportive" (Saturday) and finally a team time trial on Sunday. For the record that took my weekly total just short of 290km's.

The prologue was a bit of a surprise as we'd originally intended for it to be a shorter 50km version. I should explain that on Friday some did an 80km morning prologue as they'd arrived on Thursday night. The dozen of us who arrived on Friday had been hoping for a short flat stretch after the journey, but instead we lengthened it to really blow out the cobwebs from the drive to Orange. Funnily enough a few of the guys had set off without spare tubes and clearly the cycling gods were not happy with us as one of our more seasoned riders flatted within the first 10km's on the side of a pretty busy and narrow highway. Without going into details it took a fourth tube and a good 20mins to get back on the road leaving us all a little frustrated in the process. Rule 1: Everyone carries at least two tubes . . . 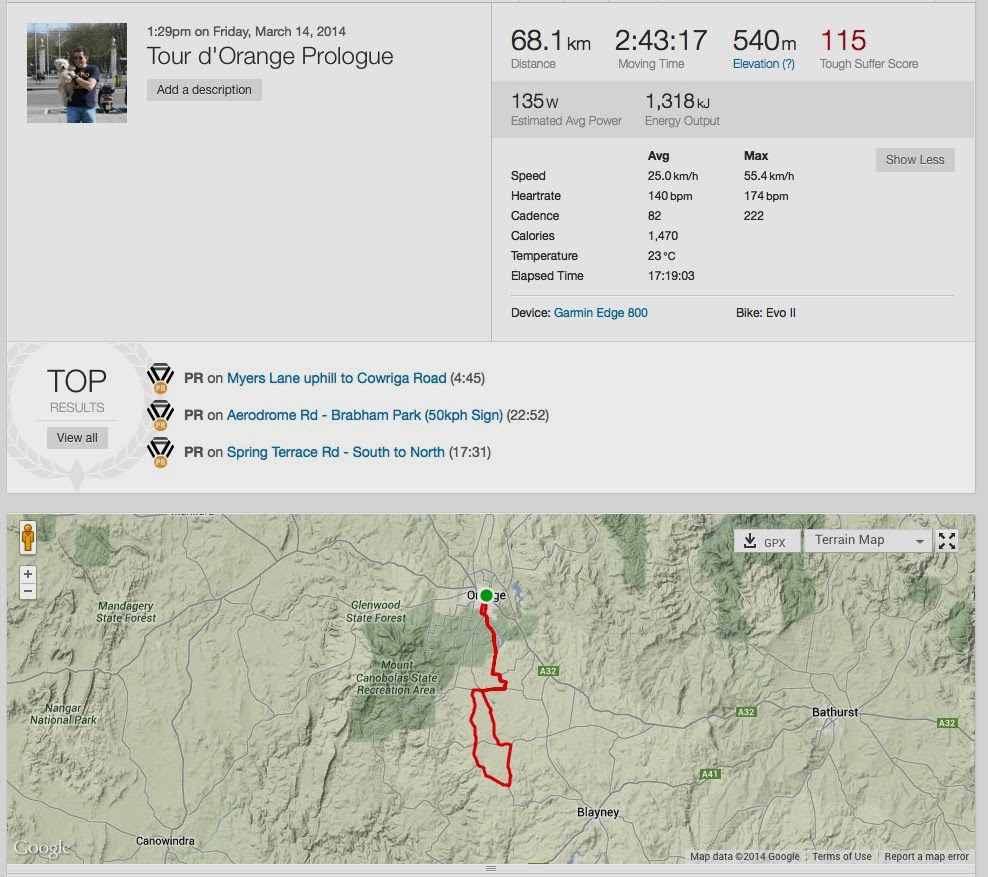 Saturday was fantastic, except for the roads. I don't know whether its irony or coincidence but one of the local riders was also the chief town planner for Orange and as such he had to take a lot of good natured ribbing about potholes and token road edges. Aside from that we had good weather and only sporadic traffic as we took the north westerly road out of Orannge to Molong. Obviously someone flatted in the first 5km's before we reached the town limits, but given what could have happened during the day the cycling gods saved us any more tubes, broken spokes or cracked rims . . . for which our peloton of 26 men and woman were all eternally thankful. 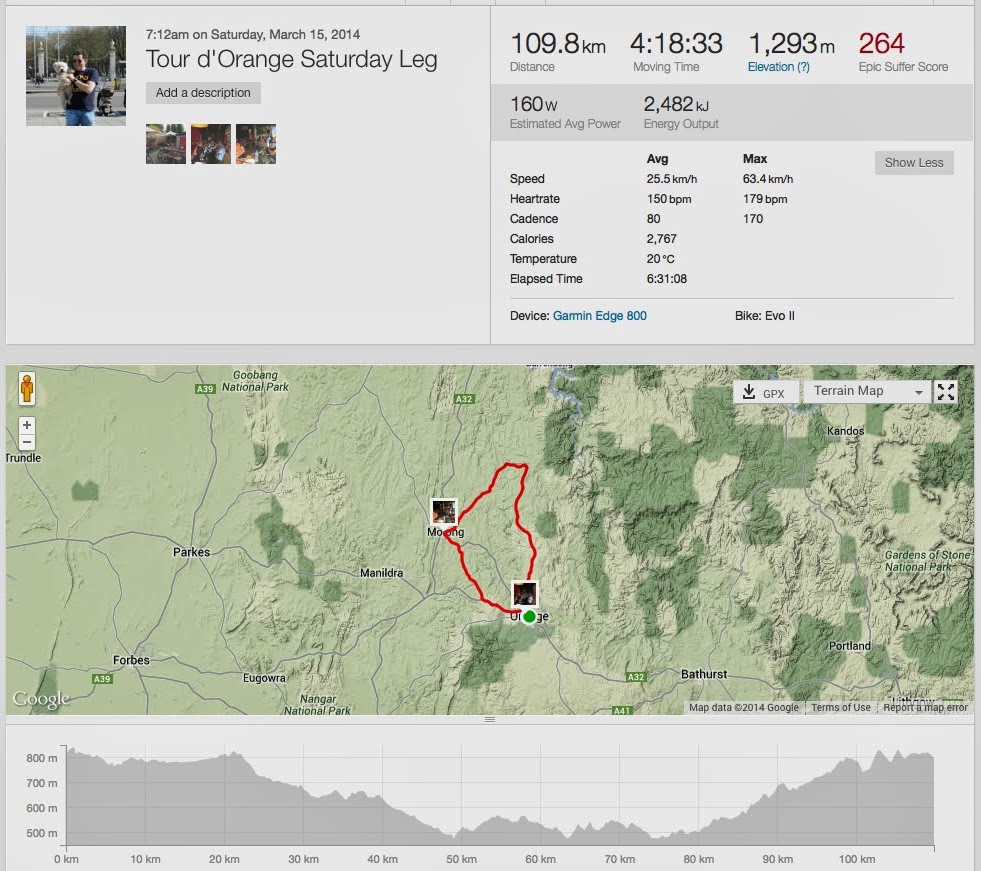 Molong sits some 70km's NW of Orange and provided us with a good spot to park for lunch. The rolling hills on our way in through up a number of challenging pinches. I fell out of the fast group with 28km's to go and surrendered the luncheon bragging rights to others. Out of Molong those undulating hills became ever more regular and there were quite a few annoying 500m pinches at 8 or 9% to cut into any tired muscles. The plan was to regroup at the main highway into Orange and split into two groups, one of which would extend their ride by 14km's to take in the "Pinnacle" climb of an additional 400m's in elevation. By the time we reached the point of separation my legs were feeling every peddle stroke and my cadence had dropped sharply as the easiest gear I had 39 X 27 was not quite enough to keep me spinning freely. Given this I chose the direct route home, which while hardly flat still gave me enough trouble. The group who continued on had the pleasure of riding home in the rain. We had only one semi-serious incident when a rider in the "Pinnacle" group came down on the desent off the top of the climb. Rule 2 : No "hot-dogging" if it starts to rain . . . he was fine and luckily we had a support car to help him regain his dignity.

Sunday was something new for me; a team time trial. Two teams of four and one team of three did a 14.4km time trial on rolling country east of Orange near the airport. 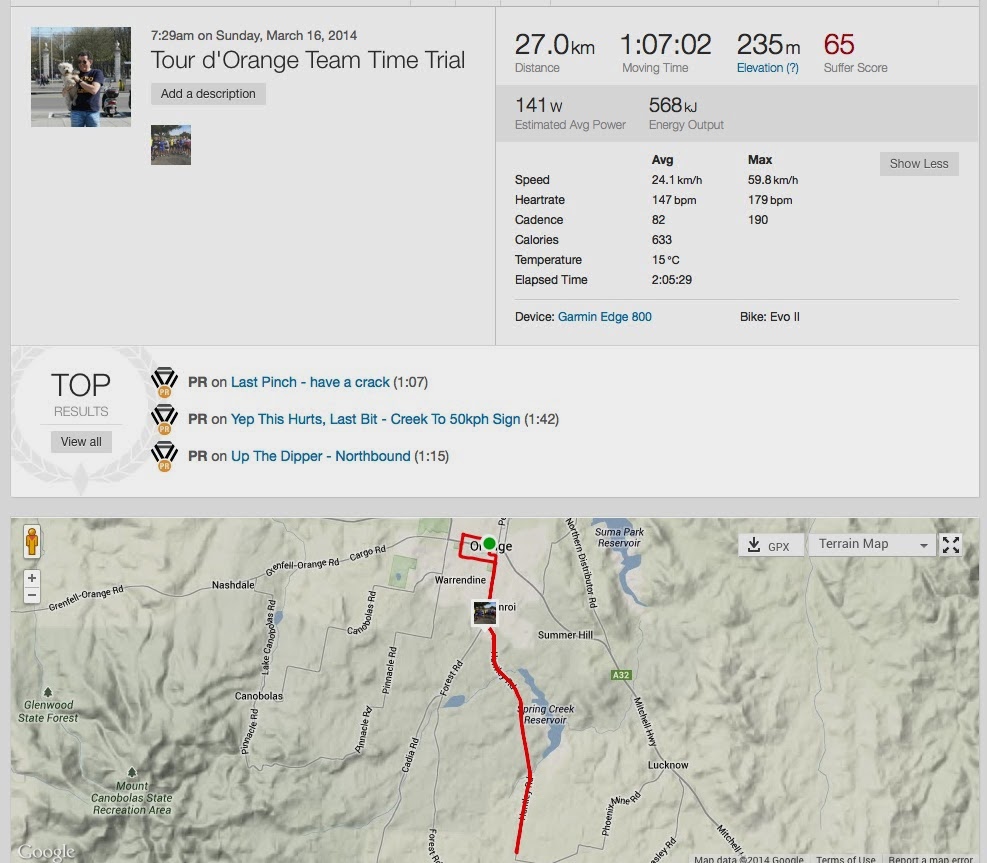 It was quite deceptive because there was a couple of sharp climbs on the way. Luckily my group had some pretty like-minded riders and as such even though I was clearly the slowest of the four we were able to hold it together for just long enough to claim the first prize in just under 27mins: 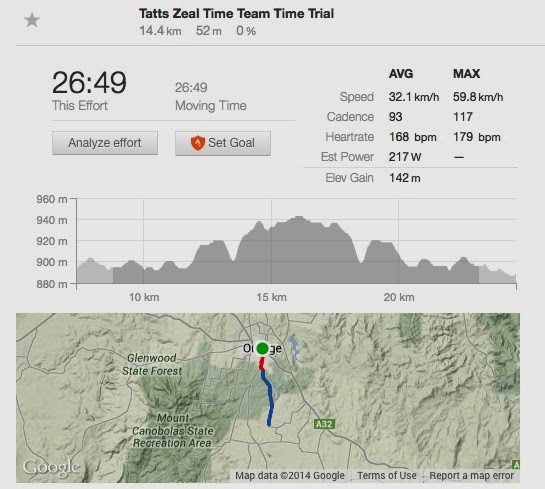 I highly recommend the format we used for the weekend, though maybe without the Friday and Saturday night wine extravaganza? If we do it again next year I think my fast ageing legs might stick to a limit on the wine and a premium on sleep. Great fun for all.

Writing this blog always gives me time to reconsider past events, not because a dwell on these things, but rather for the same reasons that caused Edmund Burke to conclude that:


“Those who don't know history are doomed to repeat it.”

One of those significant events came to mind last week when I read in The Guardian that Lehman Brothers International, a subsidiary of Lehman's Inc, was left with a £5bn surplus after creditors had been paid. I remember when Lehman Brothers collapsed that there was much schadenfreude at the time from bankers in competition with this very entreprenneurial institution. I was no great fan of their operation in Asia especially after being bailed up in a Hong Kong bar in 2007 by one solidly built member of the Lehman's team who wanted to take at least one of our hedge fund's staff outside for a muscular review of why we hadn't paid them enough brokerage. Leaving that aside many years after the fact it's clear now that Lehman's was just a badly organised institution that possibly could have been saved with time and greater clarity by bankers who gave a damn. In those heady days when the Fed was grappling to understand the complexity that was before them the path of least resistance was to cut off the obtuse and save the clear thinkers. If Dick Fuld had presented a cooler, more controlled front to the Fed, he like the heads of a number of other investment banks would have been saved the indignity of handing the keys to the administrators.

The real hero in the eyes of creditors to Lehman Bros. International must be the Bank of England and the the Exchequer that ring-fenced the assets before Lehman Bros Inc. had a chance to strip the company to meet obligations elsewhere. As a derivatives trader the first thing you think of before trading with an entity is their ability to pay you. I mean this is not like betting on a horse race, often time you'll be looking at scenarios involving 100's of millions of Dollars, Pounds, Euros or Francs. As a funds manager you're not only responsible to yourself, but also to your investors. The idea of Lehman Bros International or any number of a dozen or so major investment banks wholly owned UK subsidiaries was to take advantage of UK regulations and laws that enabled flexible dealing conditions, good dispute resolution and solid governance in respect of capitalisation of these companies. The difference between dealing with Lehman Bros International (LBI) and some SPV set up in a tax haven was you could draw on the resources of all the groups assets and not just a small pool of funds providing minimal protection in event of insolvency. It was the gearing of Lehmans Inc., through various under capitalised structuring businesses that caused the cash crisis within the group and not the operations of LBI itself that led to the collapse. What the whole event shows is that London as a centre of finance did it's job well for those who understood what they were doing.

Probably the one thing that leaves me somewhat upset about LBI is that fact that administrators have been paid a billion pounds to do the unwind in what must be one of the biggest bills in history to a client for saying your money was there all along. Live and learn.

While you're battling with deciding where you want to sit in the capital structure of a company for the purposes of insolvency investors might want to pay attention to some disturbing signals coming out of Asia. On Friday as I was driving up to Orange I received an email telling me that the Chinese were widening the trading bands on the Yuan (CNY). From March 17 the daily trading band would be expanded from +/- 1% to +/-2%. Why does this matter. Well the CNY is pegged to the US dollar and in the past the fact that the Chinese had to, like other pegged currencies step in to the market regularly allowed for a liquidity shock absorber. By widening these bands the point at which buying or selling enters the market in the case of a news event becomes less supportive and therefore adds to the crisis. I know that sounds strange to some of my US readers as it's generally their currency pair that takes the hit, but in general it helps the smaller markets even if I believe as was the case in Korea and Thailand in 97 (to name but two) can lead to some serious problems if the central bank in question does not have sufficient foreign reserves. The end result must be more volatility. Investors have been warned.
In both the US and the UK we're seeing a return to the pre-crisis IPO levels. In the US the IPO market is at a new peak since 2007, with 50 companies raising just over $9bn. The UK is doing historically even better with $5.52bn so far this year leaving it on track to exceed the previous first-quarter record of $5.87bn set in 2007. Investors need to remember that people who spent years building businesses tend not to sell them at cyclical lows, rather when you see this kind of activity it should be seen in a cautionary light. Think back to Asia in 97, the dot com bubble in 2000 and of course the general credit crisis of 2007, all of which saw exceptional activity in IPOs.

This week I have a number of meetings and even an end of week lunch. I'm hoping to get back on the bike, but these old legs of mine just might appreciate it if I keep the hills to minimum and staying on smooth roads.