Since Friday we've had the usual data dump of PMI levels for the market to consider. The one that really stood out for me was the UK. Manufacturing growth there hit its highest point in almost three years, in part helped by a high pace of job growth. The UK PMI beat expectations by coming in at 58.4 in November up from 56 in October. 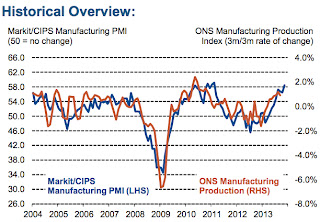 The all suggests to this blogger that my previous view to invest in the UK was sound advice and remains so, I only wish that the people I spoke to about the Commerzbank UK property portfolio that went under the hammer a few months ago actually bought in at that stage.

Such is the life of those of us acting as consultants. That's why I'm looking more seriously at getting a "real" job. You see without the institutional card I'm reliant on people trusting me more than I can expect given the years I've lived outside of Australia.

The reasons the UK has rebounded so strongly are:


This last facility is very interesting in that it offers banks cheap financing partly linked to lending to the real economy. Since it started in summer 2012, 33 banking groups have secured £23.1bn in cheap funding and seen a rise in net lending of £3.6bn. It's a fascinating facility because as recently as last week when the BoE/Treasury got worried that too much of the facility was being drawn on to finance property they chose to take action to cease its availability to mortgage linked transactions. Once again this shows the key advantage of the UK: flexibility. The rest of Europe struggles with this and therefore the UK is first out of the economic hole. The ability to react to changing market conditions without tightening the money supply into the economy is something other economies could adopt as they grapple with exit from stimulatory policies.

Meanwhile for those of us currently living in the Asia Pacific region China also managed to struggle into positive territory in its PMI. There are two indices for Chinese PMI, firstly the HSBC/Markit that came in at 50.8 for November, overshooting economists’ forecasts of 50.4. Secondly the official government survey showing a higher-than-forecast reading of 51.4 for November. This kind of good news would usually help Australia as we continue to ride on China's coat tails. I wonder what RBA Governor Stevens would think of adding the type of facility the UK has to its' arsenal of tools so as to enable the RBA to pump money where it's most needed. This blog has for over a year called for a lower Australian dollar to be at the heart of the RBA's policy, but I'm starting to see the limits of the current structures to deliver this without causing a housing bubble. Therefore if I was parachuted into the halls of power I'd suggest the following:

a) The RBA should adopt the NZ type restrictions on banks mortgage books:


b) The Government, together with the RBA should copy the UK's Funding for Lending Scheme

What the government should not do is start trying to pick winners. Currently the Australian Treasurer is being asked to save GM's (Holden) Australian operations via a direct AUD600m injection and incredibly, to this blog at least provide Qantas with a government guarantee so they can raise debt at or near the same levels as the country itself. This blog says that the available money should go through institutions who are better placed to take the risk and assess the chances of success. Qantas can have some cheap funding . . . but it's going to come through one or more of the banks and they better be prepared to justify what they do with it.

Investors need to watch closely the continued "work-out" of debts by various entities, institutions and companies. UBS is to buy back around SFr2.15bn ($2.4bn) of its own debt in an effort to cut its borrowing costs and shrink its balance sheet. They will go to the SNB and make a cash offer for five subordinated bonds, denominated in Swiss francs, euros and pounds, and six senior unsecured bonds, denominated in Swiss francs, euros, pounds and Italian lira. My point here is not that UBS is looking better placed in terms of balance sheet, but rather the people of Switzerland via the SNB have kept control of their own balance sheet by not allowing UBS to dictate terms to them.

This blog believes for example that the Spanish are about to start making headway against their own problems, as the Irish have also done. The "bad" proper bank "Sareb" said in March that it was aiming to sell almost 42,500 housing units, about half of its current portfolio, within the next five years.  They started the process in August when they sold 51 per cent of a portfolio including 939 homes to HIG, in a deal valuing the assets at €100m. Investors need to focus on these tranches as they come to the market.

I'm starting to get excited about getting off the bike and getting on the snow. I didn't ski last year, but thanks to a large bank of air miles I'll be jetting off to Europe to have a few meetings with old friends and business acquaintances in Switzerland on my way to my favourite ski resorts. I had wanted to hold off to May so I could pack up the Cannondale and ride some races in northern Italy.

One particular ride caught my eye this week: Colnago Cycling Festival, Lago di Garda, 2-4 May, 2014. It looks like a great event. Here's some highlights from the last event this team put together . . .

Maybe someone will ask me to go and have a look at some Italian property . . . I promise to get a good look at the countryside.