It's getting a bit more interesting . . .

China seems to bump along at just a strong enough pace to keep the world's economies ticking over. The problem remains that much of the activity generated in China is being fuelled by local government debt, shadow banking and trade finance. If President Xi Jinping and his government want to tackle this unofficial bubble they'll risk GDP growth slipping below 7%. Currently the official forecast is for 7.5%, but that looks already to have gone by the wayside judging from the softening up of media sources.

As usual the canary in the coal mine for China is iron ore. Below is iron ore inventory at port. Now partly there is be a bit of end of year restocking, but there's also some one offs including the shutdown for pollution related problems of some big steel producers. 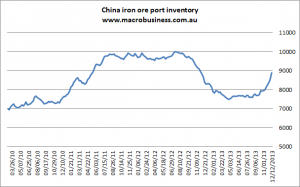 And then here's whats happening in the six month forward market for rebar . . .  the construction end of the iron ore chain. 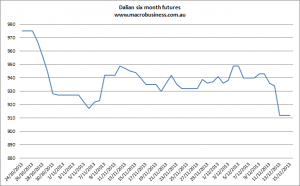 Finally here's iron ore itself. Again you can see the forward v. the spot price opening up. 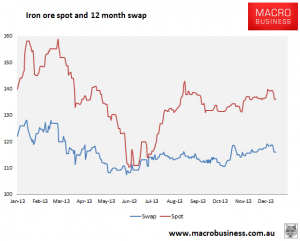 Investors need to watch this . . . This blog has been bearish on Chinese GDP for 2 years and admittedly has been surprised by commodity prices during that period. With the big five miners backing off new projects and tightening their belts it seems that the fall in spot iron ore might be more of a slow grind than a crash, especially if you think the US is picking up some slack. Which brings me to . . .

This week we get two important meetings in the world of central banking. The first and most important is the Fed's, which should not see an immediate policy shift, but might lay the verbal ground for a January move to taper. This blog continues to believe tapering comes in March and should see a modest roll-back of the $85bn a month in asset purchases to (say $60bn). Therefore I remain a Dollar bull and am becoming bearish US financials due to valuation. The real economy needs to take over if the US wants to get into a sustainable job building GDP cycle of around 3%.

The other central bank meeting this week is Japan. The thing that interests me here are the possibilities for policy failure. Readers of this blog know that I am a long time Japan sceptic and continue to believe in the maxim that if anything can go wrong for Japan it will. Therefore I was interested to hear other people picking up on this line this morning while tracking back through various podcasts I missed on Bloomberg from last week. Vincent Chaigneau is the head of fixed-income and foreign-exchange strategy at Societe Generale SA in Paris and he reminded me of the recent weakness in the Japanese current account over the past two months.

M. Chaigneau sees these two months as somewhat of a blip, but rightly points out that any longer term trend could severely hamper Abe-nomics given that its strength lies in its ability to fund from internal savings. The alternative for Japan would be to become an international debtor reliant on foreign funding, a position that would be perilous. I suggest investors watch the Japanese current account both in relation to their short JPY positions and long equity positions, because if history has taught us nothing else since the collapse of the Japanese real estate bull market it is that Japan has a propensity to snatch defeat from the jaws of victory on a regular basis. The latest numbers will be out this week.

Meanwhile in Australia RBA Governor Glenn Stevens continued to jawbone the AUD down towards 85cents. This blog has been somewhat volatile when it comes to Stevens, but last week when General Motors decided to cease manufacturing cars in Australia and Qantas went cap in hand to the Government in Canberra asking for help it become apparent that the long time RBA insistence on frightening the housing market first and a helping the receding manufacturing sector second seemed to come home to roost. The budget deficit looks likely to blow-out further since the last set of national accounts and therefore in all likelihood the economy will need stimulation from a more creative RBA. It's hard to believe that the RBA, as I've alluded to previously hasn't used the dollar more aggressively. Too little too late looks likely to become the title for Glenn Stevens biography in this blog's point of view.

There's been a lot to ponder on my bike in the last two weeks. Having said that readers should know that since my last published blog I've become a bit gun shy in Sydney traffic. Lately I've had a number of close calls, the most recent being a tangle with the L94 Bus from the city to La Perouse:

I'd like to report an unsafe bus driver. Today at 1240hrs I was proceeding along Anzac Parade near Gubbuteh Rd on my way towards La Perouse on my bicycle when I was approached by the L94  bus (Plate 1381). The bus stopped at the nearby stop and I went around it. The bus, after obviously dropping off passengers then proceeded in the right hand lane to approach along side me and tooted his horn. I was in the left hand lane. For what reason I have no idea. As we approached the roundabout at Pine Avenue I held my line and in fact increased my pace as I saw a bus stop 10m ahead on my left so as to clear the stop for the bus. The bus decided to approach closely to me again as we passed the bus stop while I was in the now clearly marked bike lane. He pulled alongside me revved his engine and cut in front of me stopping at Jennifer St and Anzac Parade. I'm not even sure that there was a bus stop there. I rode ahead again and maintained my pace (approximately 35kph)
and line on the left hand side of the single lane only to have the bus again come from behind me and this time he approached within a meter of my righthand side at approximately 60kph and purposely revved his engine. As we approached the junction of Bunnerong Rd and Anzac Parade for a left turn towards the LaPerouse bus interchange the driver purposely drove into the cycle lane on the left side of the lane in a threatening manner. I approached the driver at the interchange to ask what his problem was but was immediately yelled at. I obviously let the driver know (loudly matching his colourful language) that his actions were at the very least threatening and at worst dangerous. I am at a complete loss as to what this drivers problem was given it was a clear day with no traffic on the road except for himself and a few bike riders. This man is a menace to his passengers and other road users.

I actually got a reply to this from the government owned bus company promising to review the in-bus tape of the incident. Now I don't actually expect anything to come from it mainly because the transport workers union is just too powerful to let any form of disciplinary action be directed at one of its members. I mean in their mind it would be the thin end of the wedge.

Finally I might mention that I managed to change the bar tape on my bike by myself. That doesn't sound like much until you mention it to other cyclists who seemed to be amazed by the feat - at least my friends. The job I did isn't perfect, but it's passable.

The one thing I haven't decided on is whether I was right to wrap the tape clockwise on the right and anti-clockwise on the left or the reverse. If you google the subject and look up some of the guides on Youtube it seems like opinion is mixed. Also I decided that the thick 2.5mm Lizard Skin tape is probably not ideal for a beginner. I suggest that if you're attempting this bit of maintenance for the first time that you try a stretchy style tape from 3T as per this video:


I'd swap, but the Cannondale needs green tape and 3T don't make it . . . such are the perils of cycling fashion.
Ciao!
Posted by Mike Fagan at 10:53