Last week this blog said that the political turmoil in the US over the debt ceiling was likely to delay tapering, but I honestly didn't think it would be confirmed in such stark terms by the Chicago Fed President. Mr Evans yesterday reaffirmed his belief in monetary stimulus indicating the recent fiscal turmoil will likely delay any Fed tapering. This of course is bullish for Equities and likely to delay  the unwinding of long bond positions. Of course investors may want to control their enthusiasm in some asset classes, namely housing as more central banks start to point out the possible problems in the housing market.

The Bundesbank for example warned that apartment prices in Germany's biggest cities are overvalued by as much as 20%. Don't ask me how they can come to that number and given that the ECB's main refinancing rate is at a record low of 0.5% I'm not sure that this is much of a problem compared to Asia, Australia, New Zealand, Canada etc. Within Europe Germany and parts of the UK (i.e. London) are somewhat of an island as housing prices in the rest of Europe remain less than buoyant.

This blog previously stated that housing in Europe was starting to make a comeback and I stick by this and continue to expect that a backlog of supply is starting to clear even in the Mediterranean states. Take for example Spain, where I have previously mentioned that the Government's "bad housing bank" has started to move its' first offerings. Confirming this change in Spain was none other than a Bill Gates linked entity that yesterday was identified as having bought a 6% stake in in FCC (Fomentos de Construcciones & Contratas) the Barcelona based infrastructure company (7.64m shrs at EU14.865/shr), which is surely a leveraged play on a bounce-back. We also know that the Irish are turning things around and thus investors might wish to follow Mr. Gates and look into similar companies in the PIIGS (Portugal, Ireland, Italy, Greece and Spain).

So where are we now? This risks that investors should be watching most closely are:


Leaving aside the macro risks investors should note US 3Q earnings results . . . . If you exclude the financials (who have some one-off problems . . .JPM), companies have surprised on earnings estimates by 2.8% and 60% have beaten EPS. This has slowed when measured against the average (72%) since the start of the recovery in 09. In revenue terms 39% have exceeded forecasts which is also a slowdown from the previous pace. General Electric (GE) , for example continues to squeeze hard on it's businesses surprising on earnings by 2.0%, but missing on revenues by 0.6%.  Therefore investors need to pay heed to stocks trading on higher forward PE multiples as they are unlikely to be able to meet expectations easily on current trends.

As part of the light relief this blog likes to offer, a friend of mine sent me an article from the Wall Street Journal  highlighting the trend of Australian baristas infiltrating the somewhat staid coffee culture of NYC. I don't think I appreciated the strength of the coffee culture in Australia until Starbucks had to shut about 95% of their outlets here due to poor demand . . . i.e. Starbucks coffee didn't cut it. The Aussie and Kiwi barista thing got to London first and there's a slew of them around north London helping the Brits get passed some pretty poor local offerings. I think I've mentioned before that the coffee in Geneva was also substandard. You the Genevois tended to burn the brew leaving it somewhat bitter. The ITalians of course are the kings and they have it almost cool in order to preserve the nuttiness. I hope NYC likes what's going on. I have nothing against those percolated brews standing in diners somewhere in the midwest, but good coffee it "ain't".

Some cycling notes. I did the Sydney spring cycle with my sister-in-law on Sunday. We totalled up just over 80k's in warm, but not oppressive weather. It's a great day out mainly because they shut off some lanes on the Sydney Harbour Bridge giving you one heck of a view in traffic free peace. 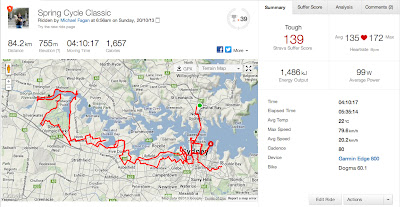 Finally a Cannondale update. All the parts have arrived except for the frame. It's clearly stuck somewhere in the ether that is DHL. Tracking cut out a while back, but as that happened with the other parts coming from Bike24 I'm not surprised. In the meantime the crew at cheeky Monkey returned the Evo Team frame and as soon as I get the packing from the new frame I'll be sending it of to the carbon repair specialist in Perth.