Very few people outside the anglo-saxon world or for that matter outside the Commonwealth would understand the significance of the international sporting competition between England and Australia that begins today at Trent Bridge in Nottingham UK. Of late the contest has lost something for me as living in Switzerland several years left me somewhat detached from my roots.

The joy of cricket and to some extent games such as baseball is the time taken and the accumulation of statistics that can be applied to occupy the observers mind, which in the case of a cricket test match is 5 days. Cricket at the test match level is not always about the action on the field. Sometimes it's about the ease of viewing and the associated recall of similar scenes over many years. The Tour de France's 21 stages are are similar viewing experience. It only occurred to me during the 2011 TdF while stretched out on the couch of our apartment in Geneva that I was doing the same things that I used to do while watching the cricket, namely sipping a drink, discussing the terrain (or pitch in the case of cricket) and occasionally looking up some stats or history of what I was looking at. The hours pass away easily and although cycling doesn't have the formal breaks of cricket (lunch and tea) it does have a similar rhythm of intense moments of attack and long periods of stalemates. The ebb and flow of a stage in the mountains is to my mind similar to a day at a test match and over the period of the entire race or match is more alike than different. When the Australian's and the English jog out onto the field at Trent Bridge the middle aged men in their straw panama hats that litter the stands pen in hand marking out scores on the cards you can buy at the ground are the same men now seen half way up a great mountain climb watching the seconds tick by between riders, the only difference between the two observers is the likelihood that the middle aged man in lycra probably rode to the spot on the Col and will probably ride home healthier and distinctly less buoyed by an alcoholic beverage. Either way it is a day well spent.

George Orwell wrote in 1984: “Sanity is not statistical.” And in the world of that novel the realisation that truth is not just the sum of Big Brothers lies is key to appreciating the predicament of the hero. Economics has a similar level usually expressed in sentiment indices that look to give statistical force to what in fact is nothing more than the surveyed's intentions or feels as to the current business environment  Confidence can be lost as quickly as won and currently many countries are in a confidence wilderness, like a cyclist on a climb not knowing that the finish is just a few metres higher around the corner. Until confidence returns the market volatility will increase and we will continue to oscillate between hope and despair.

Yesterday the UK Factory output in May fell 0.8% from April v. an expected 0.4% rise. The market largely ignored the number, though it sold off the Pound and provide the monetary doves will some modicum of comfort that the BoE would maintain the current lose policy. The IMF also helped the doves by cutting its global growth forecasts by 0.2 percentage points for both 2013 and 2014, to 3.1% for 2013 and 3.8% respectively. Readers of this blog would know that I have long seen the IMF as well behind the game in term of it's growth forecasts. The stock market was largely positive, but as I mentioned yesterday there's always "ying" to the "yang" and Copper being the ultimate judge of global economic growth sold off again. Equity investors whether in the service or manufacturing sector would do well to watch copper closely over the coming months.

One thing that is helping us move forward is the start of the US reporting season. Yesterday Alcoa set a one for what lies ahead mainly via comments on China (in my mind). Obviously I'll be looking at what CEO's from market heavy weights suck as GE and CAT have to say, but for today we have: 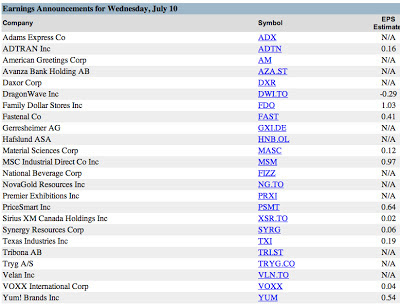 The above table is from the Yahoo Finance Diary pages and investors should note that the pages provide links to various earnings conference calls that allows me and you to here in a timely manner the same calls the big bank analysts have access to. Well worth a listen.

I'm finding it hard to decide on a new smart phone. It was easier 3 or 4 years ago when Apple had the market to itself and you really just had to decide whether you wanted to pay the premium or not. It's interesting now that Apple has finally found not one, but several competitors in the space and is finding it hard to navigate around them. 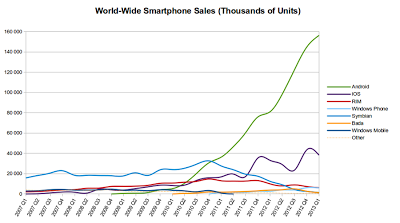 Some are now speculating that a similar situation exists now in the "wearable" gadget sector. The recent appearance of such prototypes as the google glasses and speculation of iWatches has me sitting on the sidelines waiting to see what may come next. I wonder if like the lack of confidence elsewhere is because of over stimulation of the expectation and this in turn is actually excluding many from purchasing now? If that is the case should we be more bullish in the "gadget" sector as a whole knowing that there is demand sitting on the sidelines? Or is it more likely that the western world is now so saturated at the preium level and the gains available on these new gadgets will not be enough to have a shy consumer part with their money. Investors need to understand the difference between fashion and utility. The first smartphones had utility not offered anywhere else, will google glasses or an iWatch offer a quantum leap or merely a paradigm shift?