Disruptive Lunch Series 2014 ends. Happy holidays to one and all.

Last Thursday was the final BBY Disruptive Lunch for the year. Three entrepreneurs were presenting their ideas to the usual crowd of curious investors. Expert360, ChimpChange and Zeetings represent many of the existing themes we've seen developing over the last year in the tech sector. Just as preliminary disclaimer I should say that the IBCyclist Consultancy is already contactable through Expert360. Therefore unlike others in the room I probably bring certain prejudices to my analysis of the business model presented by co-founder Bridget Louden.

Expert360 is the ultimate trickle-down of the high-end consultancy world. I don't know whether it's Linkedin on steroids or clearing house of professionals wanting to cut out some of the social media aspects of other similar marketplaces. The company's goal is to offer SME's access to the same expert business advice normally reserved for established blue chip corporates. You may want Mckinsey's to sprinkle some of their magic on your business but without writing cheques for multiple millions it's back to the mid-sized accountancy firm  you've always engaged. With Expert360, you get access to individual and smaller firms with specific skills. These skills often were honed at those larger consultancies. Take, for instance, my profile page: 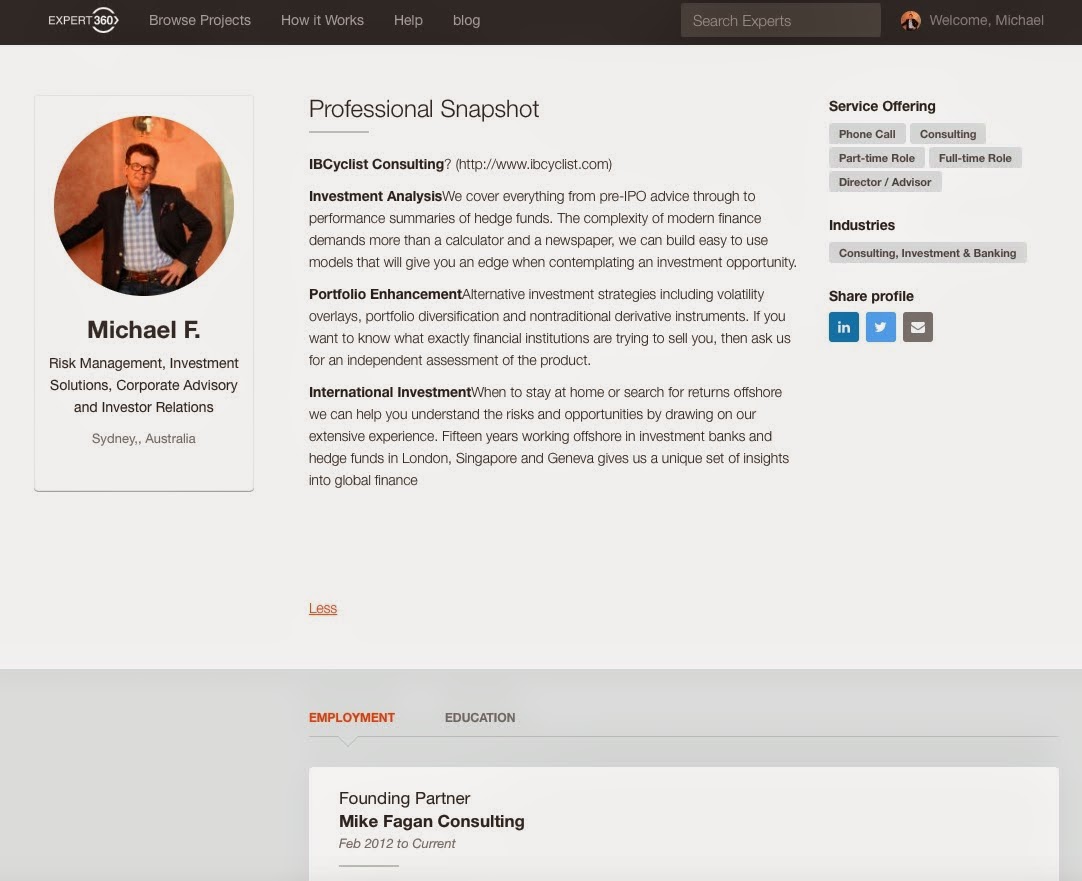 If you hire me or any other consultant through Expert360, you can manage contracts, invoices and payments through the platform. That's why it's a kind of clearing house. That means cutting down on admin. It's a good solution if time is of the essence. Expert360 adds a transaction fee to consultations. The fee will depend on Expert360′s contract with that particular Customer. A consultant such as myself doesn't pay to belong to Expert360.

The big question is: Does Expert360 work? My experience is minimal as I think the model favours refugees from existing consultancies. Certainly if my established client base were more extensive within Australia I could see the advantages more clearly. The portability of my name is important, and Expert360 offers me the chance to be mobile. Bridget and her team are betting on the trend for independence amongst advisors. In a way, they not only disrupt the normal advice lines, but they also disrupt the need for me to spend capital on little used infrastructure. It's an interesting way of enabling fragmentation of the business world.  I know many in the room were utterly convinced of this trend, but how many of those are living the model? I remain somewhat sceptical as I haven't had one referral through Expert360 since I joined. That probably says more about me than Expert360. The idea is good and prima facie the market is deep. My problem since being back in Australia is that SME's and high net worth individuals are very sticky to existing advisors, even if that advice is somewhat outdated.

Expert360 makes sense. Linkedin is unfiltered, but to get on Expert360 you have to apply. How rigorous that vetting is I cannot say. I know HR managers at large listed corporation can implement an algorithm search of Linkedin. SME's don't have that facility. Therefore, Expert360 is an easier to navigate alternative to than the admittedly larger database that is Linkedin.

Expert360 is an interesting opportunity for investors looking to play the post "great recession" employment market. The company is currently in another round of capital raising. I am able to facilitate the introduction of anyone interested to the bankers in question, and will not receive a commission. Readers will know that this blog doesn't post specifics in such cases, but if you feel like a chat, I will be happy to take calls.

I don't like the name ChimpChange, but then again I'm not the GenY demographic that Ash Shilkin and the team is chasing. ChimpChange is a low-cost, instant money transfer facilitator that uses a combination of smartphone app and Mastercard to get around existing banks. It's what I wished existed when robbed in Germany in 1987. One phone call  and within seconds I could have been on my way with cash in my pocket. Here's the video we got shown:


It's not difficult to understand. They have a clearing agreement with a US bank. ChimpChange makes money from the associated MasterCard fees and spread on any FX. The app is currently available to US customers only. They need about 25,000 users to breakeven. The marketing campaign focuses on US college campuses, which I think is smart. The US banking system is still cheque orientated, while GenY college students are tech-focused. The synergy is clear. The problem is how high the barriers to entry are? That's not a question I can answer.

ChimpChange could be a remittance monster. We know that huge swathes of diasporic third world populations currently have very few options to return wealth to their homelands. Given the growth of smartphones, it's logically for the Western Union's of this world to be ripe for competition.

Consider that Americans send $2 billion a year to Cuba, even though there are significant barriers to commerce between the  two countries. Add to that (say) the Philippines where remittances constituted about 8.6% of the total Philippino GDP in 2012, and you'll understand the global significance of cheap and fast money movement.

Originally I'd intend to invest in ChimpChange the moment I left the BBY offices as the team disclosed to me they were already in capital raising mode. Due to deadlines I was squeezed for time to do my due diligence. I strongly advise investors to forgo investments that might cause them to circumvent their normal procedures. If your DD involves contacting referees and doing company searches, then work to your timetable and be willing occasionally to forgo the odd opportunity. In ChimpChange's case I'm watching it very carefully and strongly advise readers to do the same. It just smells like a potential winner to me.

The presentation by Tony Surtees of Zeetings was more theatrical than I've become used to at these events. Mind you it was theatre with a purpose. Zeetings provides presentations enhancements that allow audiences to participate in various data surveys. That sounds dry, but after you log in and start checking boxes you do get a sense of engagement. The presentation itself was about big data; the Zeetings piece was just an add-on to demonstrate a new tool.

Zeetings in a way was a good full stop to the series for 2014. If any one theme resonated loudest, it was a progression of data mining amongst even the most passive tech offerings. First came the Monte Carlo simulation in an effort to win games of chance. The casino by nature of the repetitive execution of an action within tight parameters was easy to data mine. Man counted cards and loaded the dice long before they crossed to the New World. When Alan Turing produced the first electronic computer the ability to crunch numbers began an arms race that passed through the military, aerospace and on to finance. 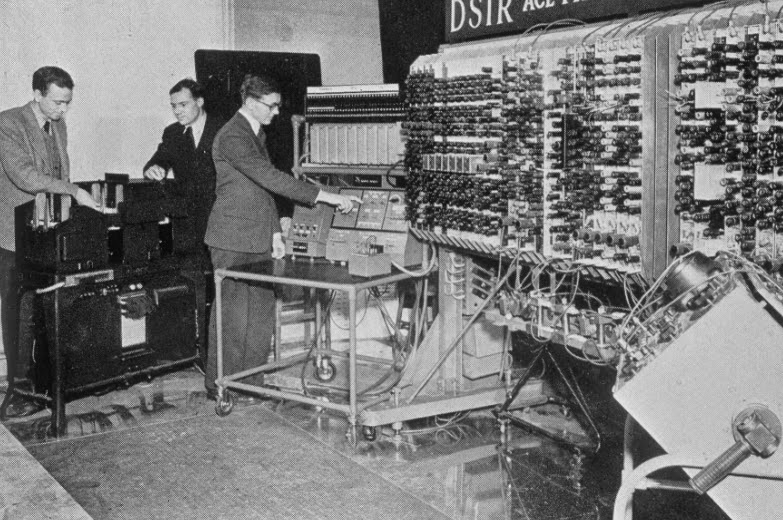 When I sat at SBC Warburg in London in 1998 and met two Ph.D. astrophysicists tasked with building the first algorithmic trading model I had ever seen, things started to change. From the very moment, they described to me how they used predictive models to define atomic particles it was addictive. Next came Google with their uncanny (for the time) ability to target search results. It goes on and on, until today when two entrepreneurs with a spreadsheet and the money to buy a data series can predict by shopping habits if a woman is pregnant.

The ultimate question for an investor is can the entrepreneur make data actionable in some way? Secondly how high can they build patent walls to protect their discovery? Finally, what role do governments, and for that matter people play in the success or failure of these ventures? 2015 will surely bring more challenges.

Many thanks to all the companies I was privileged to see this year. Thanks also to the BBY corporate finance team for inviting me to these presentations.