When the tide goes out make are you still have your swimwear on . . .

Sometimes being an investment banker cyclist there's a little moment of schadenfreude that gets me through the day. Today it was the results from US sporting goods retailer Dick's Sporting Goods (Ticker: DKS).

I never did get golf. I tried hard, but I  never did understand the culture. To be frank I was also hopeless and didn't have the patience to spend the hours necessary to progress my game. By the time I moved to Singapore in 2006 I also needed to get fit and so without even knowing it at the time I had played my last game of golf. I noticed a nice piece on Market Watch today looking at the results from Dicks Sporting Goods. Highlighted in the piece was the company’s Golf Galaxy stores which suffered a 9.3% decrease in same store sales. Now some call this the "Tiger effect", but retailers would do well to understand that the baby-boomer bubble is fast peaking and the tide has already gone out with generation X. Lets look at an example. Here's a chart of the Giant Manufacturing Company of Taiwan (9921.TW) v. Callaway Golf (ELY): 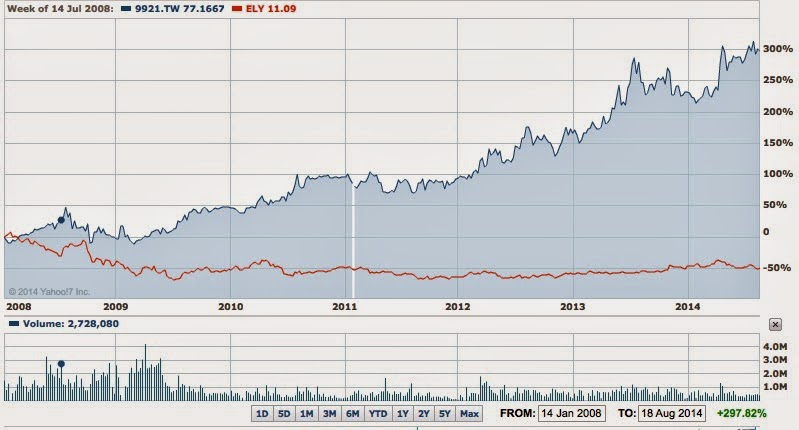 I took Callaway because it's a pure golf company, others like TaylorMade are owned by bigger companies (in that case Adidas). Giant is one of the biggest bicycle manufacturers in the world. The outperformance of cycling is obvious, it's clearly been a better investment choice. Now that doesn't mean that bicycle growth will continue because at some stage the market will become saturated. Think about it this way; the limits of golf participation started to become obvious as clubs jacked up membership fees to basically exclude people from participation. In other words it became an "exclusive" sport in a world that is embracing "inclusivity". Gen X onward no longer sees golf as an aspirational sport in the way that the baby boomers have. The world changed. We no longer see smoking as a relaxing indulgence, nor drinking alcohol at work (think Mad Men) as acceptable. There's a whole world now seeing health costs spiral and they want to mitigate that in a way that golf just can't. Golf is still going  to be a sport people play, it's just that it won't grow at the same rate and as an investment banker I call this a mature industry. Golf as a sport or investment now will pay dividends like a bond pays coupons, but it won't provide capital growth that it has in the past. As an investor you need to recognise these moments and embrace them for what they are, not what they were.

This brings me to some disturbing news from the gambling industry. The trend of casino closures in Atlantic City New Jersey continues with doors shutting at the Show Boat. Atlantic City was once the venue of choice for the north east US gambler, the casinos have tried to transform to resorts, but the weather, the falling cost of air travel and a surge in competition especially at the lower end started to eat away at the business model. Four of Atlantic City's 12 casinos have closed, meanwhile the State of New Jersey looks likely to approve more competition in the form of a new venue at the Meadowlands, a complex which is a limo drive from Manhattan.

Atlantic City isn't the only place where the Casino industry is showing signs of weakness. Macau’s casino revenue fell 3.6% in July, following a 3.7% decline in June. Interestingly VIP play was estimated down by about 20% as in June, while mass market play continued to expand around 30%, and July produced similar results.

That to me is indicating that the high rollers go where they get the newest toys and the mass market goes where they can. That's dangerous for a location, because in terms of the lower end it means other localities can change the paradigm quickly because of nothing more than geography. I know my HK broker friends will tell me that China isn't about to open multiple resorts on the mainland anytime soon and that's true enough. Right now Macau has the location advantage, but as with what happened with Atlantic City, so to can the same thing happen to Macau. If cycling is the new golf, and Meadowlands is the new Atlantic City, then just fill in the blanks for the next Casino mecca in Asia. Investors in casinos should note that the sky is not falling, but the growth is slowing.

I'll be at another BBY Disruptive Lunch tomorrow and I'm looking forward to it. I've really enjoyed looking at some of these new businesses over the last few months and am somewhat buoyed by the extent of the enterprise I'm seeing in Australia. There's still a solid core of "mining is the only game in town" investment banking here, but you get the sense that the tide has gone out on that sector for the moment. BHP's de-merger plan this week could be the last great party of the decade for the mining teams of the big banks. If you're at a bank that misses out on a mandate associated with this you better be looking for a new arrow in your quiver.