Composite materials are taking over the world. In 2007 while working as a hedge fund manager in Singapore I spent hours listening to stockbrokers describing the magic that was within reach of Japanese carbon fibre wonder company Toray Industries. 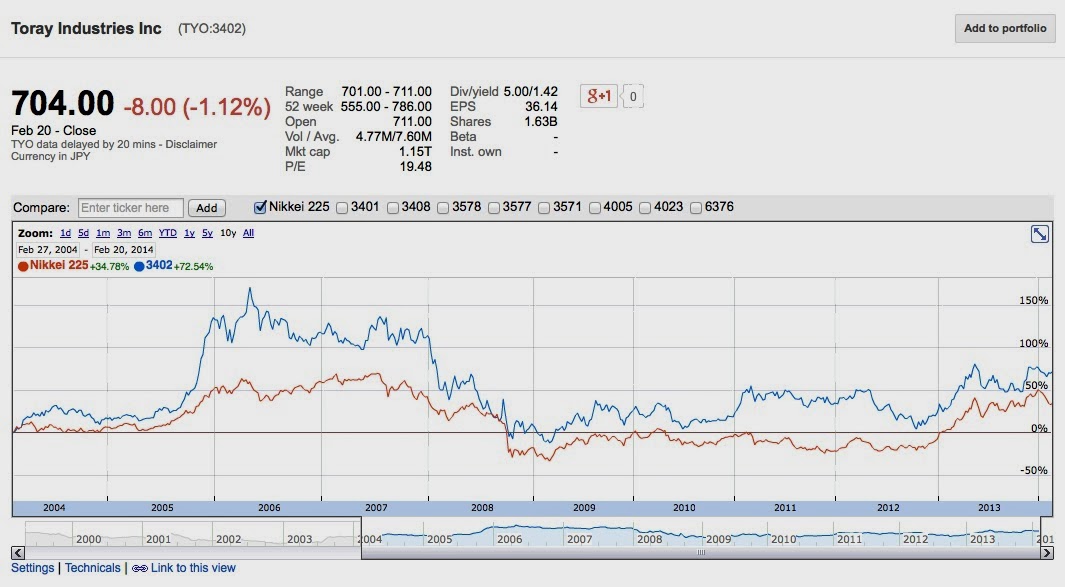 Toray at the time was one of the prime contractors to Boeing for the soon to be king of air travel the 787 Dreamliner. For a long time it outperformed the N225 and was a good bet for those of us happy to be long technology and short the rusting carcass of Japan's hopelessly moribund industries caught in a race to zero margin nirvana. Problems arose when engineers at Boeing couldn't master the bonding of the wing frame box to the aircraft's main fuselage. If you were part of this clogged supply chain you were toast and Toray Industries shares quickly returned to a marginal out performer. As with a lot of Japanese companies investors will almost always be frustrated by the conglomerate nature of these companies. Often you'll want to buy into a company because of some amazing new technology, but what you'll probably get is a management likely to be timid in exploiting the new segment and almost always end up giving you 20% of what you want. Of course if you were in another country you probably would have floated of the carbon fibre business to allow it to achieve it's full potential both in entrepreneurial terms and in terms of company valuation.
Technology companies need to be single minded in their passions to an almost pig-headed degree. I want to see companies with either unique technologies (such as Toray's high end fibre business) or be in position to use technology in a new way that plays against the consensus (think Apple under Jobs or todays big news WhatsApp). If you can get both then you're really in an investor friendly zone.

While skiing recently I was struck by just how ridiculously heavy the gear you have to carry around is. As I said to a banker in Zurich, how come my entire bike weighs about 6kgs, while my skis weigh at least 7kgs and boots must be close to 10kgs. Think about it . . . imagine strapping an extra 15kgs on your bike and trying to ride up a hill. In fact imagine the same scenario downhill and what that means to your breaking. Why then haven't we seen more composites in skiing? Well there are companies out there experimenting with this type of thing. Dodge Boots in the US or the team on this report from Bloomberg:

What I liked about Zai skis was their purported desire to damn the costs and just try to produce the best skis they can. As these cost from CHF 6 - 10k I haven't raced out and bought a pair, so maybe they're not very good? I don't know whether the company will achieve what they set out to do, but if they stick to their business plan they'll probably be OK. My point is that investors need to think outside of the consensus to achieve returns greater than normal.

There is a war going on between currency and other markets at the moment. If you're long equities you want to believe the Fed is not going to continue "add" to the taper anytime soon. That is a problem because minutes of the January policy meeting released yesterday showed several members f the board were in “the absence of an appreciable change in the economic outlook, there should be a clear presumption in favor” of continuing to trim asset purchases by $10 billion at each meeting. If that happens yield plays will have to devaluated. The currency market believes it with the Bloomberg Dollar Spot Index reaching its' highest level since Feb. 13 yesterday.

Equity world is clinging on to 'bad' data from the Phili Fed, Empire State manufacturing and Chinese PMI (amongst others). Broad market equity bulls think all this data will see the Fed pause. This blog thinks that the bad US weather has distorted the US data (NY has got 40+ inches more snow this year than average).

The bond market has other problems. Emerging market anxiety is centred on China. The HSBC and Markit Economics Index of Chinese manufacturing fell to 48.3 from January’s final figure of 49.5. GDP growth is forecast to fall to a 24-year low of 7.4% in 2014. The worry for investors in bonds is that we start to get a surge in credit rating downgrades of China-centric companies. This blog has seen what happened in 1997-8 in Asia when growth hit a debt wall. That was a time when Samsung Electronics was within a month of not being able to pay there workforce and Malaysia shut its' currency market down. Given this investors should re-evaluate their current exposure to emerging market bonds a and instead look for euro-centric issuers to express their preference for any carry advantage they might wish to take.

It's Friday in Sydney as I write this and the weather has turned for the better. Being unemployed has it's advantages as I'll be getting on my bike to stretch out again. I've managed to get nearly 150km's under my belt so far this week. I'm riding on the north side of Sydeny on Sunday morning with a big group of middle aged men and the odd lady. My cold / lung problems have nearly disappeared and I'm noting that I have a bit more zip in my pedal stroke. Yesterday I hit the park after 2 hours in the dentist chair and happily racked up the km's. Amazingly cycling seems to be growing daily in Sydney. It's very encouraging that even in the face of poor infrastructure, driver ignorance and a hilly geography that people are increasingly putting in time on their bikes. I'm not sure what the end game is for this city, but I tend to think that numbers alone, like in London, will dictate more cycling infrastructure. Good days are ahead . . .