James Hardie is an Australian building materials company that got into a lot of trouble locally due to asbestos content in some of their products. Now after many years of litigation and struggling against the tide of a slowing housing market globally the company yesterday surprised the ASX when it announced an operating profit of $US108.3 million ($115.9 million) for the six months to September 30, up from $US56.3 million a year earlier. This excludes asbestos, regulatory and liability adjustments, which would put its profit higher at $US194.1 million. It has upgraded its full-year earnings target to between $US180 million and $US195 million. Why do I mention this? Well, Hardie's is predominantly a US housing play now days and for a management team so bearish on the world in general it must be a huge signal that for the first time in many years they are investing in new capacity in the US. Investors know that this blog has for sometime been positive on America, but a data point such as this is good news all around.

Investors should now revisit stocks such as Toll Brothers the upmarket home builder if they wish to leverage this recovery to it's maximum:

"Six years of pent-up demand is just beginning to return to the market," Chief Executive Douglas Yearley said on a call with analysts to discuss the preliminary results.

Toll has underperformed the S&P500 year to date, but is starting to gain momentum. The company is expecting a 65 percent jump in revenue in its just-ended fourth quarter (taking it across the $1 billon threshold for the first time since 2007) and also reported a preliminary 6 percent rise in orders. David Crowe, chief economist at the National Association of Homebuilders, said 12 percent of houses sold in the United States this year to date cost $750,000 or more. Last year, the number was 9 percent. Toll Brothers said it expected its average selling price to have risen 21 percent to $703,000 in the three months to Oct. 31 meaning they are now in the sweet spot.

If Toll brothers and Hardie is telling you demand exists in the worlds biggest economy, what then does the fact that Global gold demand fell to a four-year low in the third quarter tell us? Certainly it implies that inflationary expectations are low at the moment.

Gold demand was 869 tonnes between July and September, according to data published by the World Gold Council. There was a collapse in demand from India, traditionally the world’s largest consumer of gold (likely to now be overtaken by China) due to a series of government restrictions on gold imports. Said imports fell 32 per cent over the quarter to just 148 tonnes, the lowest since early 2009. Indians hold over 1trn in gold currently and it basically sits in banks and temples gathering dust. The problem is that the Indian currency has been under pressure, which forces up the prices of imports (especially energy), draining the governments reserves due to their subsidising of key fuels. The more gold they import, the more INR has to be sold to pay for it and the greater the pressure on the central government.

This is a problem for investors in all emerging markets. The gold restrictions demonstrate the ability of governments to legislate you out of returns. For example, being short INR is no longer an easy position to hold when the government takes this sort of action. Of course for India it may end up being a good thing. India is not in the same league in terms of exports as China, rather it's about demand and a low INR and middling growth is not going to help the world economy. If India could unleash a third of it's gold reserves this blog is of the view that Asia as a whole would benefit considerably. Investors should watch this situation closely.

As it's Friday and this is a short end of week blog I want to mention that a friend of mine has reminded me about the Orica-Greenedge Winery Ride on December 1st at Mitchelton Vineyard in norther Victoria. I looked up last years event on Strava and looks to be around 1500m of climbing in one big block. Other than that it's flat and should be fun. 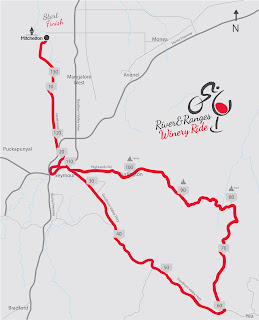 I'd like to do it, but it's one long drive to get there and at this late stage it's a bit hard to get a partner. One thing I learnt about riding sportives in Australia when I went to the Wiggle Classic in the Hunter that the riders don't seem patient or organised enough to form mini pelotons and help each other as they do in Italy and Switzerland. People are friendly, but the mass ride thing is still reasonably new to the great majority of riders here, so I guess that will change over time.